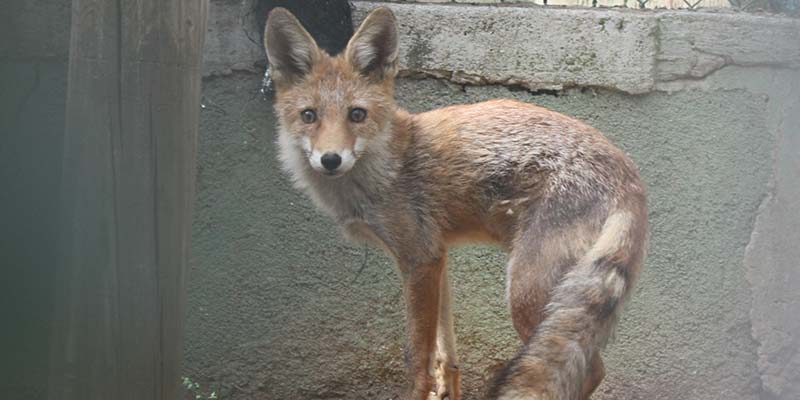 We recently visited the Higher Agricultural School (part of Castelo Branco Polytechnic), situated in 166 hectares of countryside, offering many animal-geared professional courses and degrees. They have their own cows, sheep, horses and pigs, horticultural green houses, botanical park and arboretum.

CERAS, the centre for study and rehabilitation of wild animals, is established in the college grounds and we were privileged to be invited to the release of a fox that had been found by the GNR badly burned in the Pedrogão Grande fires in June.

Foxes can be found throughout Portugal mostly living in forests or agricultural areas, but they will easily adapt to new environments and are known to venture into towns and villages in search of food. When we lived in South East London, we had two foxes living in the empty garden next door which we fed on a daily basis!

The recent find of foxes on Tavira beach has highlighted the plight of this beautiful animal, which is so often persecuted not only by hunters, but farmers whose livestock or produce is destroyed by them. Foxes grow to one metre long weighing up to 10 kilos and they are carnivorous predators who will ruthlessly kill the poultry in a pen without eating them all. Also feeding on carcasses, birds, eggs and small rodents, the foxes’ hunting technique involves slowly moving towards their prey before jumping into the air and diving down to grab the victim. Studies have shown that foxes appear to use the earth’s North-East Axis and natural magnetic field to aid them in their hunt!

Foxes are generally night creatures and live around nine years in groups formed by one male and several females. Mating occurs during January and February, resulting in one annual litter of four or five cubs born in the spring, in the underground coves built in bushy camouflaged areas. The cubs remain underground for four weeks and become independent in the summer months. By the autumn, the young foxes leave their group to establish their own territories.

Did you know that fox hunting is still legal in Portugal? Allowed from October 1 through to the end of February, this timescale incorporates the mating season and can therefore be a threat to the species. Each hunter is allowed to kill three foxes per day unless they are using the “batida” method whereby a group of hunters beats the undergrowth to force the fox out towards another group of hunters. Between 2005-2015, 142,450 foxes were killed in Portugal. That is over 14,000 a year!

CERAS operates with volunteers and is run by the Castelo Branco branch of Quercus, a non-governmental environmental organisation for conservation of nature. Representatives of both institutions were present for the fox release.

Leaving the CERAS installations, we drove 25 minutes through the hills to the banks of the River Ponsul in the Parque Nacional do Tejo Internacional, a beautiful unspoilt location with abundant vegetation and wildlife for the fox to secure a new territory. Everyone stood back as the cage was put on the track and the door opened. The shy fox refused at first to emerge but, with a little push, he came out and looked around at the small silent crowd eagerly snapping photos. A few seconds later, he took off down the track stopping momentarily at a bend for one final look back at his rescuers, I thought as a way of saying ‘thank you’. It was amazing to witness and makes the hard work of the volunteers worthwhile when they can see a successful result of all their care.

The Parque Nacional do Tejo Internacional was formed in August 2000 after a long battle by Quercus to have the 26 hectares of nature protected, yet conflicts still arise over licences for construction and roadways.

Sustainable tourism activities are promoted to highlight the abundance of fauna and flora. Hills covered in cork and holm oaks, heather and French lavender; over 300 plants and 24 species of fungi are already catalogued. There are 154 species of birds including the rare black stork, Rüppell’s and griffon vultures and royal eagles. Amongst the 44 types of mammals, there are wild boar, deer, foxes, otters and mongoose. Twenty different reptiles, 15 types of amphibians, 12 species of fish and over 153 types of insects make the area one of the most protected in Portugal.

CERAS’ main objective is to recover injured or at-risk wild animals and release them back into the wild. Formed initially by students of the school (which still provides many volunteers to work in the centre) and Quercus members, the group opened their doors in February 1999 with the arrival of a Little Owl. From the initial 30 rescues in 1999, they now have up to 200 each year. However, mostly due to the dreadful fires, they have already received over 350 animals this year. CERAS returns to the wild 60% of their rescues.

The infirmary allows for veterinary treatments and the internment room has controlled heating and lighting to aid recovery.

The centre mostly receives birds and so they have four flight tunnels which allow the recovered birds to practise flying. These are especially used for the large griffon vultures and storks. External recuperation compartments allow for continued observation prior to release.

Laboratory and investigation services are also provided, often to find out the cause of death of local animals.

Run entirely on donations, CERAS receives no government help. They also raise funds from sponsors who ‘adopt’ a wild animal to fund their care. Donations of food, medications, materials and volunteers to help with building maintenance are an essential part of the centre’s survival.

Funds are also needed for the GPS tracking equipment, which CERAS places on some of the released birds to monitor their success. One stork was recently found in Gibraltar 14 years after it had been released and two of their vultures have been found in Senegal!

Thank you to María Losada-Cuquejo, a biologist at CERAS, for the photos! It was an honour to participate in the release and I hope more help can be found for CERAS to continue this vital work.

For more information on their work and activities, or to make a donation, visit quercus.pt/ceras