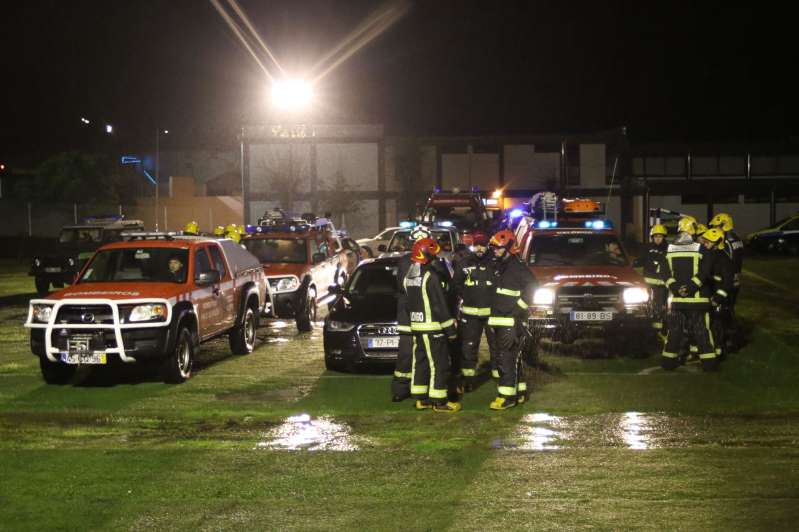 Four accomplished professionals – two pilots, a doctor and a nurse – were killed on Saturday evening when the INEM helicopter they were travelling in ‘exploded’ over dense countryside east of Porto in thick fog and intense rain.

Everything suggests the Augusta A109S leased to the State by Babcock Portugal hit a communications mast.

Eye witnesses have talked about a “huge explosion” and a “ball of fire”.

But while investigators try to unravel the cause of the tragedy – the first of its kind in the history of the INEM fleet – the incident has highlighted major response failings.

It took almost two hours before searches were mounted to look for the downed aircraft, despite receipt of a 112-call from the area close to the scene (in the borough of Valongo) just less than five minutes after the purported overhead ‘explosion’.

And it was not until five hours later that the wreckage and bodies were finally located.

President Marcelo Rebelo de Sousa, who attended the funeral of one of the victims on Tuesday, has compounded the rising sense of national unease by saying “there were too many failings” in authorities’ uptake.

These ‘failings’ mean “the State has failed”, he told reporters, which “is not good for the confidence of Portuguese people”.

Yet again, a human drama has been made worse by media revelations, and insinuations that prompt search and rescue response might have made some kind of difference.

Today (Wednesday), the country’s most popular tabloid carried a front page on how much the State has failed in responding to the needs of populations decimated by wildfires.

All in all, this week has been a dismal one for the run-up to the festive season.

What we ‘know’ for certain is that the helicopter – described early on as “the one that worked the most” in the INEM fleet, due its base in an area far from major hospitals – was returning home (to Macedo de Cavaleiros) from a routine operation, transporting a seriously ill woman to intensive care in Porto.

Last radio contact was at 6.37pm, at which point Lima informed central control that he was enroute for refueling in Baltar.

Two minutes after that a call to 112 (national emergency) described a “helicopter over the Serra de Santa Justa and Serra da Pia mountain range, a huge bang and an explosion”.

At 6.57pm that information was transmitted to PSP police, at which point urgency appears to have been overtaken by a series of shambolic procedural failings.

An initial investigation by Civil Protection published on Tuesday “pointed to four failings”, two by 112 and two by NAV (the country’s air traffic control authority).

President Marcelo has said he “hopes” the final report does not confirm these failings – though everything suggests that it will.

Meantime, the shock and depth of human agony involved has been filling column inches.

Daniela Silva, for example, had swapped her shift to be on the flight in order to “surprise colleagues” at Baltar fire station by turning up at the Christmas Party. As it was, the party fell apart as news came in that the helicopter was missing, and that she was on it.

Another ‘certainty’ is that weather conditions on Saturday night were dreadful. Locals talk of only “three metres of visibility” which has lent weight to the theory that the helicopter may have hit an 80-metre high communications mast on the Valongo hillrange.

These details will be confirmed once Civil Protection investigators complete their final report, in tandem with operations on the ground by DIAP, the department of investigation and penal action, which is also trying to determine the circumstances that led to the fatal crash.

Searches underway since 8.15pm last night for the INEM helicopter that disappeared with four people on board ended with confirmation in the early hours of this morning that there have been no survivors.

A doctor, a female nurse and two pilots lost their lives when the Augusta A109S came down in the northern parish of Valongo (Porto district) in what have been described as “very adverse climatic conditions”, involving fog and intense rain.

Families of the crew were informed before the news went out to the press, and an investigation is now underway to try and determine the causes of this tragedy.

Reports suggest the helicopter may have hit a communications mast, but there is also the possibility that something may have gone wrong beforehand.

This is the first time, in a history of 16, 370 flights, that anything of this kind has happened to an INEM medical rescue helicopter.

Reports coming in through the night have described this particular aircraft – owned by Babcock which has been licensed by the State for medical and firefighting operations since 2000 – as the one that “had most registered flights among the medical emergency fleet and served the region of the country that was furthest away from major hospitals”.

The medical team on board was returning from transporting a seriously ill woman from hospital in Bragança to intensive care at Porto’s Santo António Hospital.

From everything that has been published, the mission went ahead as it should have done, and the helicopter was on its way back to its base in Macedo de Cavaleiros when it suddenly ‘disappeared’ from central control’s radar screens.

Questions late into the night were focusing on the delay between the helicopter’s ‘disappearance’ and the launch of Civil Protection’s response.

Various media sources have been calling it “a controversy”, bearing in mind there was an hour and 45 minute ‘delay’ between the helicopter’s ‘disappearance’ and Civil Protection becoming ‘informed’ – and then even more delay before search efforts got underway.

But the district commander for the service, Carlos Rodrigues Alves, has stressed “everything functioned as normal”.

Two secretaries of State present at the late-night press briefings refused to be drawn on the subject.

Says Diário de Notícias, the wreckage of the helicopter and the four bodies – “two inside the cabin, and two on the outside” – were found at 1.30am this morning in an area of dense woodland, with difficult access..

Over 200 firefighters and PSP agents were involved in the night’s searches, backed by 35 vehicles.

Shortly before 10pm, the Air Force sent up a Merlin 101 helicopter to try and help with the efforts, but this ended up returning to base in Montijo due to the adverse weather conditions.

The downed aircraft was discovered 700 metres south of the small chapel of Santa Justa, in the parish of Valongo. A trail of debris led searchers to the dismal find.

INEM has since released a statement: “The occurrence of a situation like this – during the daily mission of teams of the Institute dedicated to saving lives – is motive for profound sadness and sorrow. It is naturally a particularly difficult and extremely painful moment for the Institute and its professionals, who have been grateful to have already received hundreds of messages of support”.

Going back over past incidents involving INEM helicopters, Diário de Notícias recalls the moment when one came down after colliding with electricity cables during a forest fire in the area of Castro Daire in 2017, killing the sole pilot on board.

Last night’s tragedy is all the more poignant in that this particular helicopter was one that worked the most for a district that had fought tooth-and-nail to keep it despite authorities’ plans to the contrary.

Various judicial decisions had threatened INEM’s base at Macedo de Cavaleiros, but ultimately populations and their elected representatives won, and the helicopter remained to counter-balance the closure of nighttime emergency services in the area.

For now, the names of the victims have not been released, though this may change during the course of today.

Television news channels are now talking about the victims, particularly the nurse Daniela Silva – one of a respected local family of volunteer firefighters – described by those who knew her as a really wonderful young woman, “always ready to help anyone”.

By lunchtime today, all four bodies had been recovered and were being transported to the local coroner’s office.