Last week, Safe Communities reached a significant milestone in that it celebrated 10 years of providing the international community in Portugal with information and services through its website and Facebook page. If you were wondering why the number of Facebook posts was significantly less on Tuesday, November 9, it did have a very good reason.

Tuesday was the day when the founder and president of Safe Communities Portugal, David Thomas, finally received the Most Excellent Order of the British Empire Medal (MBE).

David was awarded this honour in Her Majesty the Queen’s New Year Honours List 2021 for “services to public safety and to British nationals in Portugal”. However, due to Covid-19 restrictions, it was only now that the official presentation could take place. David was given the choice of the presentation in the UK (with one guest) or in Portugal where more guests could attend – he chose the latter.

The venue was the British Ambassador’s Residence in Lisbon, and the occasion was hosted by the UK Ambassador Chris Sainty.

Representatives of the GNR and the PSP including PSP Commander Superintendent Martins and the newly-appointed GNR Commander Lieutenant Coronel Carlos Almeida, plus Civil Protection Operations Commander Richard Marques, and the UK Consular Services were also able to be present on this special occasion.

Also from the Algarve was João Fernandes, President of the Regional Tourism Board; Vítor Aleixo, Mayor of Loulé; and Alberto Mota Borges, Director of Faro International Airport.

Around 40 guests in all heard the Ambassador praise the work that David and Safe Communities have done over the past 10 years, but especially when the pandemic started, and the information they were able to relay to the non-Portuguese speaking population as well as provide the most up-to-date details of the government legislation.

David gave an address thanking all those who had made this possible and the trust, friendship and close partnerships that had been developed over this period.
David stated that those attending from government were those whom he had the pleasure to work with closely, especially during the challenging times of 2017 and 2018.

He recalled being contacted whilst on holiday in the UK in June 2018 by Tiago Oliveira, now president of AGIF. Following a Skype meeting at the time, Safe Communities became deeply involved in the change process concerning the prevention of rural fires and self-protection measures, including the ‘Safe Village, Safe People’ programme.

David also spoke about the immense challenges Covid-19 has posed, with Safe Communities dealing literally with thousands of enquiries 24/7, remembering the SCP Committee are volunteers.

He thanked, in particular, Fernanda Gonçalves, Mike Evans, Eliana Taveras, Daniel Fernandes and others for their incredible work during this period, often giving up their social time, and the Safe Communities team as a whole. The award acknowledges all their work.

Unfortunately, Vice-Admiral Gouveia e Melo, (former) head of the vaccination task force, whom David and Fernanda had met raising various vaccination issues, was due to attend but could not do so due to an urgent priority.

Lastly, David emphasised the considerable support of the British Embassy Consular Team, including from the start (vice consul) Clive Jewell. He also thanked his wife Jane for all the support she had given and his two daughters Shelley, also partner John, and Sophie.

David concluded by thanking the Ambassador and all the Embassy team for making the ceremony a most memorable occasion.

At the conclusion, a cake was presented to commemorate 10 years of the existence of Safe Communities, which was launched in Albufeira in October 2011 at a British Embassy Outreach with previous Ambassador Jill Gallard officiating. 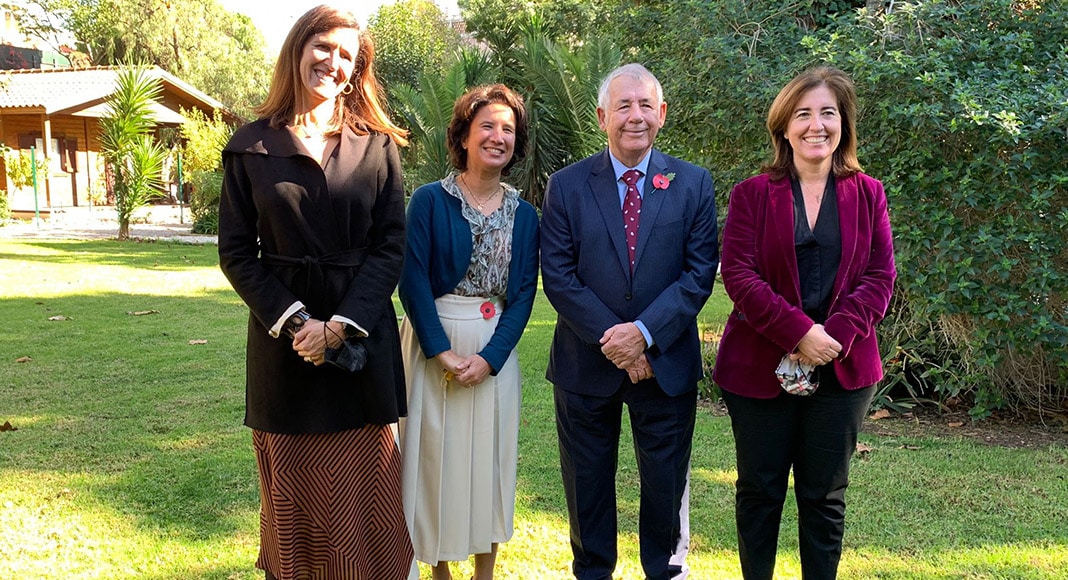