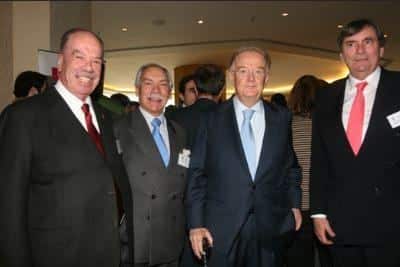 The High Representative for the United Nations, Jorge Sampaio, has launched a stinging critique of the banking system, lack of regulation and the ‘buy now pay later’ culture that had brought the world’s financial system to its knees.

Addressing a lunch of the Portuguese-Spanish Chamber of Commerce and Industry in Lisbon last week, the former Portuguese President attacked what he called the “incredible financial adventures which had had inevitable repercussions on the economy” to such a point that all businesses and institutions from the smallest to the largest “no longer trusted one another”.

He said the economic and financial system had seemed incapable of putting anything but its own selfish interests first for decades while ignoring any kind of “fairness or social equity”. Financial greed had, in short, replaced “human, charitable and social development and growth,” he said.

“What has failed?” he asked. “Without doubt regulation; today no one can pretend to ignore or deny that if the financial system can’t regulate itself, then it must be regulated.”

Now the state was having to step in – the same state that had for so long been accused of having an excessive presence – to defend democracy, protect sovereignty, defend institutions, safeguard transparency and promote innovation and save the financial system, the survival of companies and their jobs,” he said.

“I stress now that we need to recover a sense of calm and fight the strategy that insinuates that we have to change something so that everything can stay the same.”

On the question of bi-lateral Portuguese-Spanish relations, Jorge Sampaio said they bore witness to a long and fruitful path in terms of political, economic and cultural cooperation with radical changes in trans-border relations.

“It is not now, at a moment of deep (economic) crisis, that we should stray from this path but rather foster greater convergence while respecting our own identities in a multiplicity of ways which mutually enrich our reciprocal relationships, but also with regards to consolidating the European project to which each of us can give our contribution,” he said.

Dr Jorge Sampaio warned that both countries needed to have the awareness of recognising “the world we’re moving in”.

There was a “lack of adequate and effective market regulation” with the attendant “weaknesses and insufficiencies, arrogance and distance” shown from the “people responsible”.

The former President called on society and government to defend democracy and republican values, defend social justice, pluralism, citizenship, the separation of powers and democratic representative institutions, including political parties, and called on all parties to carry out necessary reforms.

On a national and world scale, there needed to be accountability, social justice, a defence of public interests and responsible citizenship.