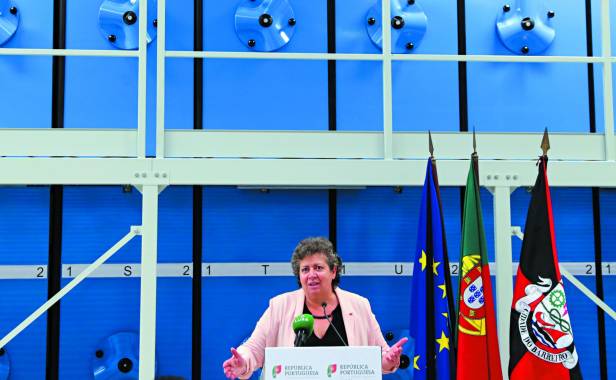 Ana Paula Vitorino – wife of current minister for interior administration Eduardo Cabrita – has been chosen as the new president of the AMT (Portugal’s authority for transports and mobility).

The association of Transparency and Integrity – not to mention leader of the PSD Opposition Rui Rio, and quite a few others in between – disagree. They see the nomination as not simply “evident conflict of interest” but proof that the Socialist ‘jobs for the boys’ ethos is still very much alive and spreading its tentacular bonhomie.

Ms Vitorino was removed from her post as Minister of the Sea in 2019 after a renewed wave of indignation at the number of family members in government (click here).

It’s not clear what she has been doing in the ensuing 20 months (other than being a regular Socialist MP), but her return to high office will see her on a very large salary, complains Rui Rio – while Sara Coroado of the Portuguese arm of Transparency International says the whole situation reeks of political power “disrespecting the spirit of the law”.

It may not be quite as shocking as the bunny hop by former finance minister Mário Centeno to leadership of the country’s central bank, but it still smacks of political expediency – creating “an ethical problem” like the possibility of ‘conflict of interest’.

The salient issue here is that regulatory bodies like AMT (and indeed the Bank of Portugal) are meant to be independent of political power, explains Ms Coroado.

It would be one thing if Ms Vitorino had been chosen after an open selection process. But she hasn’t. This “simply serves to increase citizens’ distrust” in the way the country is being run, suggests Ms Coroado.

Iniciativa Liberal (IL) – the right of centre minority party with just one MP in parliament – concedes that Ms Vitorino may well be qualified for the job, but so too will be others “among the 10 million Portuguese”.

A statement from MP João Cotrim Figeiredo recalls that “the Socialist Party has demonstrated repeatedly that it has no hesitation when it comes to placing interests of every nature ahead of those of the Portuguese people”.

In this particular case, it seems highly likely that Ms Vitorino’s husband will be removed from his post at the next government reshuffle (expected after the municipal elections this autumn). He has become extremely unpopular due to various PR disasters – and one horrible death (click here).

For IL “any movements to compensate the departure of members of the executive through revolving door mechanisms that favour either them or their family members” should “not be tolerated”.

Says Expresso, Ms Vitorino’s new appointment will have to be ‘ratified’ by parliament. Everything points to this being likely although there is precedent to suggest the posting could come a-cropper. Back in 2018, Socialist MP Carlos Pereira dropped out of a top job at energy regulations authority ERSE after a parliamentary commission denounced his appointment as “based on party political assumptions”.