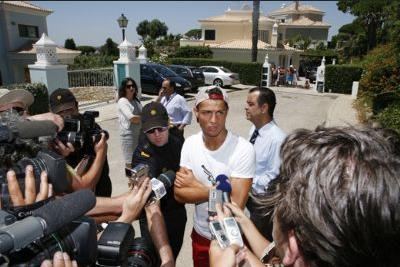 Cristiano Ronaldo, officially the most expensive football player in the world since his record breaking transfer from Manchester United to Real Madrid, has been enjoying a discreet holiday in the Algarve.

Having arrived on a private jet in Cascais, the star travelled south where he and his immediate family reportedly took up residence in two 1,500 euros-a-day Vale de Lobo villas.

Shielded from the general public and journalists by tight security, the 24-year-old has divided his time between the private swimming pool and the golf course before reporting for his fitness test in the Spanish capital on June 30.

The official beginning of summer also saw fellow World Cup finals hopefuls Maniche and Ricardo preside over a beauty contest in Albufeira which was also attended by singer Bonnie Tyler.