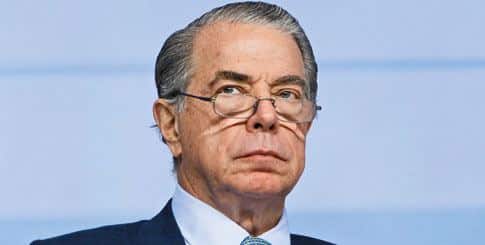 Less than a day after the good bank that emerged from the BES collapse posted historic losses of almost one billion euros, former BES ‘boss of this all’ Ricardo Salgado has come bursting back onto the scene, saying it is time for the Governor of the Bank of Portugal to be hung out to dry.

Latest losses suffered by Novo Banco not only cannot be laid to blame at his door – as they have been – says Salgado, but they show that clients had more trust in his family’s bank than they do in Novo Banco.

It is a swingeing attack by a man who is on €3 million bail on suspicion of all kinds of financial skulduggery, but then he has always proclaimed his innocence – and so far, there are no charges in either the Monte Branco investigation or that into BES in which he is under suspicion.

“It is time for the governor of the Bank of Portugal to assume the responsibilities for his actions,” Salgado has written in a statement.

“It was the Bank of Portugal that prolonged the transfer of so-called toxic assets from BES, including the sovereign guarantee of the State of Angola to BES Angola for more than a year,” Salgado continued, adding that the central bank is also “responsible for the transfer of senior bonds that were being sold in part by Novo Banco”, thus putting Novo Banco at risk in the eyes of “institutional investors of great relevance on the international scene”.

As Observador website continues: “Pointing blame at the governor (Carlos Costa), the statement said that Ricardo Salgado will not run away from his responsibilities over the management of the bank, but that at the same time he will not accept responsibility for the management of Novo Banco, and even less for the decision of resolution which he never agreed with.”

Meantime, Novo Banco’s woes continue, with 500 jobs being slashed as part of a “restructuring effort” and financial analyst Marco Silva putting the boot in on national television, agreeing more or less with Ricardo Salgado.

Salgado made “many errors”, Silva told Jornal 2 on Thursday night. “But he is not the only one responsible for what happened at BES, and what continues to happen at Novo Banco.”

Silva posed the rhetorical question: “Who represents the interests of the State and defends the Portuguese” in banking today? “Rigorously no-one”.

Bank of Portugal supports dismissal of 500 at Novo Banco

But the bank regulator appears unruffled, despite the echo of attacks coming in from all corners – including very public diatribes from prime minister António Costa.

The bank has simply announced that it supports the restructuring ongoing at Novo Banco, and agrees with the collective dismissal of 500 members of staff.

Workers’ unions, however, are of a different opinion and have said they will do everything they can to see that only those who want to go are released from contracts.

SBSI, the syndicate of southern and island banking staff, has told Expresso that it does not think the bank needs to resort to collective dismissal at all, and that it will be “accompanying the process” and hopes that what will end up being used is “recourse to early retirements”.