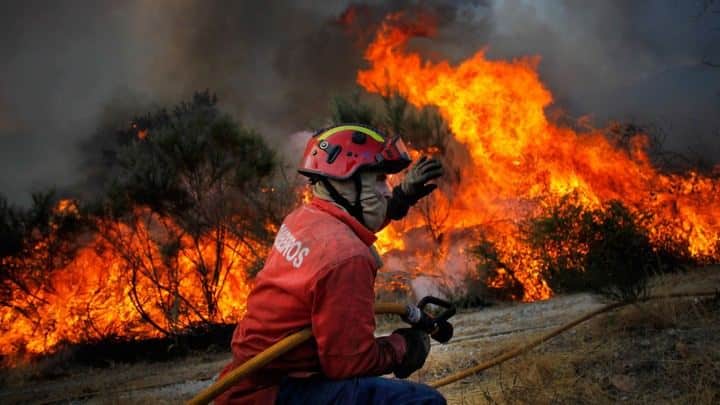 Despite all investments made towards combating wildfires in Portugal, the country’s Civil Protection chief says the territory is “still not safe”.

“Prevention is working, but it is still not enough”, General Duarte da Costa, president of ANEPC, the national Authority for Emergency and Civil Protection told Lusa – and there is no way the service can do without its beefed-up aerial support.

This was a question apparently put to him at the latest meeting of the Integrated Rural Fire Management System.

“The answer I gave is that I don’t feel confident enough at this moment to reduce the number of aerial supports because there are still no upstream solutions that allow me to have a perfectly safe territory.

“When I have the forests all tidied up, with cleaning in the primary and secondary strips, when the territorial planning is done and everyone knows which is his or her plot, then the number of incidents will decrease a lot. Then we will be able to transfer resources from the operational component to surveillance and prevention“, he stressed.

Since the horrors of 2017 (when two major fires claimed the lives of over 100 people) enormous progress has been made in rural forest management and wildfire prevention. It is in this area that the issue of forest fires which traditionally menace the country through the summer months is won”, he explained, “not through firefighting”.

Solutions lie in “territorial planning, in the registry of what forests are, in the capacities to make our forests something that is profitable for local residents”.

This “remodelling of the territorial model takes years”, he conceded – giving an estimate of “maybe 20…”

Efforts since 2017 have seen the country claim a “95% success rate” when it came to “initial reaction” to the 8,000 rural fires reported.

In the general’s mindset, he will only be “happy on the day that zero major fires occur and that all of them are extinguished in the initial reaction phase“.

About the looming fire season – and in spite of all the talk of drought – Duarte Costa seems no more concerned than he has been over previous years, albeit he stressed the need for “constant planning”.

“One of the lessons learned” is that “even if you always do everything right there is a big chance that things will still go wrong“, he said.

“If we don’t do things well, if we don’t plan and don’t work then it goes wrong for sure …”

DECIR – the State’s fire fighting special service – for this year will be known later this month.

Duarte Costa believes it will be “similar to that of 2021″, stressing again that the whole process is one of “constant improvement” … “with greater capacity for intervention in areas of greatest risk” and “a greater perspective of understanding the risk” before fires actually break out.