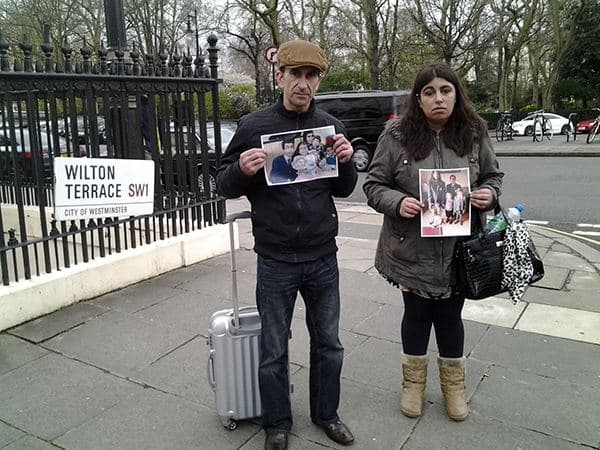 What will be a crucial meeting between representatives of the Portuguese Embassy and Lincolnshire social services has now been set for April 17. The meeting, arranged on the request of Portuguese authorities, is designed to discuss the possibility of releasing the Pedros’ five children into the protection of Portuguese social services. Announcing the date in its Wednesday edition, Correio da Manhã newspaper said the meeting will involve the Embassy’s social aide José Galaz and social services director Janice Spencer, to be accompanied by lawyer Rebecca Andrews. Participation by the Portuguese Consul from Manchester has yet to be confirmed, said the newspaper.
Carla and José Pedro, the Portuguese couple who claim their children were unjustly taken from them to feed a UK adoption scandal, face new heartbreak this week. Unless Portuguese authorities can negotiate a breakthrough, the couple’s two youngest children will be officially put up for adoption. According to Público’s Ana Cordeiro – who has been following the case closely in the UK – once this happens the process will be “irreversible”.
“I am incredibly unhappy,” mother-of-five Carla told the Resident over the telephone on Tuesday. “I haven’t lost hope, I will never lose hope, but after a year fighting, you can imagine … I am just incredibly, desperately sad. This has all been a real nightmare.”
Her hopes are shrouded by fears, as only last week RTP television channel carried a news item with a black picture of the couple painted by Carla’s own parents, alleging that her eldest son had suffered abuse at home as an infant. The story centred on him having swallowed pills when his mother was not looking.
“It is all lies,” Carla explained. “But it has done nothing to help us.”
Indeed Ana Cordeiro’s latest story in Público quotes Portugal’s secretary of state for Portuguese communities abroad, José Cesário, as saying the same.
Cesário is reported to be working hard behind the scenes to bring the Pedros’ children – all Portuguese nationals – back to Portugal.
The understanding is that they would be taken into the Portuguese social service system, from which the Pedros feel they would have a much greater chance of getting their children back.
“The Portuguese system is a clean system. We have all the proof we need to get our children back,” Carla told us. But she added that she has been advised by the Portuguese authorities to say nothing more for the time being. “I signed a paper to say I would say nothing more. I am not allowed to reveal anything.”
Meantime, the couple’s plight has been featured on BBC television. The pair appeared, supported by Liberal Democrat MP John Hemming, chairman of the Justice for Families group and a key player in the campaign to expose what has been billed as a forced adoption scandal affecting scores of immigrant families in Britain.
Earlier this year, Hemming gave a television interview where he advised any parents suspected of child abuse in UK to “go abroad”.
“You can’t get a fair trial here because you cannot rely on the evidence being fair. It’s best simply to go if you can, at the right time, lawfully,” he told BBC’s Panorama.
It’s an option no longer available to the Pedros who are now living on tenterhooks.
Carla told the Resident that husband José, 43, is still able to work as a forklift driver but she is so overwrought she simply cannot concentrate on anything but trying to get her family back.
And as soon as that happens, she told us, she and José will be leaving England as fast as they can, “never to return”.
For now, her children, aged 14, 12, seven, five and three, are being cared for by foster families in Skegness and Stanford.
As we reported last week, the children were forcibly removed from their parents’ Grantham home last year after the eldest child, a son with behavioural problems, complained at school that his father had beaten him. It was an allegation that the boy has since repeatedly retracted, but, until now, the Pedros have been denied free access to any of their children.