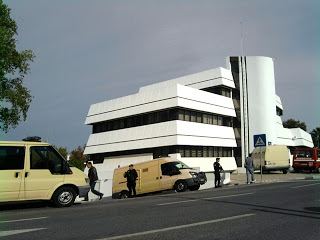 Albufeira || After all the razzmatazz in the media, the much-publicised trial of three England football fans arrested in Albufeira for hooliganism during the Euro 2004 championship has been suspended.
The official reason is that one of the trio, Lewis Andrews, has not been properly notified. Indeed, according to Lusa news agency, the judge presiding over the case intimated that the court wasn’t even sure where Lewis was living.
Intriguingly, only days before the Daily Mail carried a quote from “newly-wed Andrews of Oxfordshire” in a story which claimed the fans all faced “up to five years in jail” if convicted of the charges against them. “I am not going to court because they might arrest me again,” Andrews told the paper.
This latest delay could well work in the men’s favour. Legal time limits have already thrown out the cases against at least 21 others arrested for hooliganism over several nights of that fateful summer in Albufeira. Time limits could now kick in here.
“It is possible because these facts are from 2004,” Andrews’ court appointed lawyer, Tânia Luz, told Lusa on Tuesday. “There have been delays for notification, suspensions over notification and yes, there is a maximum limit.”
This “could or could not” be used also by the defence of the other two facing charges – Richard Freeman and Wayne Finney. Unlike Andrews, Freeman and Finney are being considered non-compliant, and their trials were set to go ahead even in their absence.
The utter confusion over this latest development suggests that it is highly likely that none of the cases will ever come to court.
As Sky News’ Martin Brunt reported on Monday, “Portuguese prosecutors have until December” to put the three men on trial. With the habitual break for judicial holidays in August and all the legal shenanigans that would be involved to bring unwilling defendants to face the consequences of a trial in their absence to Portugal, it is unlikely that four months would be enough.
Needless to say, the authorities here are not averse to using controversial fast-track extradition to get defendants to face Portuguese justice. This happened to fireman Garry Mann who was extradited from UK a full six years after the riots and then jailed in a high-profile case that one British High Court judge dubbed an “embarrassment”.
Natasha Donn