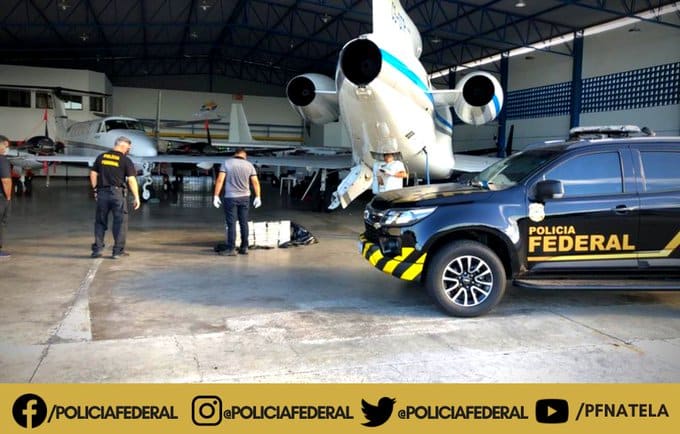 The extraordinary story of a private jet due to fly from Brazil to Portugal with various personalities in the footballing world as passengers – and a hidden half-ton load of cocaine – just keeps on getting more extraordinary.

On Saturday, the jet’s owners, Portuguese company OMNI Aviação e Tecnologia were described as ‘surprised’ that the cocaine had been found, secreted in the plane’s fuselage.

But today, tabloid Correio da Manhã suggests the plane was already known to the PJ; was “in its sights” no less “referenced for suspicions of other drug transports”.

This is a plane that appears to have regularly carried footballing personalities back and forth between Portugal and Brazil.

On the manifest for a proposed flight that didn’t happen were a number of them, including Lucas Veríssimo, one of Benfica’s latest ‘star players’.

Says CM today, possibly the fact that Veríssimo was initially due to fly (later changing his plans) caused traffickers to think the plane would suffer “a lower level of control”.

It’s certainly this that police will now be trying to find out.

Another high-profile passenger, Portuguese lawyer and former president of Boavista club João Loureiro is described as having told police everything he knows (which appears to be nothing) and his story is now being corroborated.

João Loureiro insists he has been heard by the Brazilian federal police as a witness. Elvis Secco, the national coordinator of the Federal Police drug apprehension unit says otherwise.

According to Mr Secco (cited by Jornal i), Loureiro is one of five suspects in a case focusing on drug trafficking and money-laundering.

Again according to Mr Secco Brazilian police have asked Portuguese counterparts to “identify João Loureiro’s assets in Portugal and Brazil”.

“At issue” says CM “are trips realised previously between Portugal and Brazil, and the list of contacts on the other side of the Atlantic”.

João Loureiro is understood to have travelled over to Brazil on January 27 with Spanish citizen Mansur Ben-barka Heredia whose car – parked at Tires aerodrome – has now been apprehended by the PJ for ‘forensic testing’.

According to Visão magazine citing Observador online, Mansur Ben-barka Heredia is on the PJ “radar as a suspect for drug-trafficking”.

Both men were the only passengers on the jet when it flew from Tires in January to Brazil’s Jundiaí airport on the outskirts of São Paulo, via Cape Verde and Salvador de Baía.

Investigators are also looking into the way the drugs were packed, says CM – as it seems to mirror the packing of drugs detected in previous apprehensions.

Says time24news.com, “the drug had been divided into tablets marked with logos of famous sports brands”.

Another question is who would have been picking up the drugs? How would they have planned to remove the haul from its hiding places in the fuselage?

This is a story full of questions which so far seem to have very few answers.

Queries surround the reason for most of the passengers finding alternative routes back to Portugal, even though they had been on the original flight manifest – and João Loureiro’s message (extracted from records by Brazilian police) to the plane’s captain requesting a “rigorous inspection” of the jet “but not explaining what led him to do this”, says CM.

Bizarrely, the time24.news report says “the apprehension (of the drug) was only possible because the pilot of the private aircraft communicated to the control tower that his flight commands indicated some kind of malfunction. After the alert, mechanics who went to the plane to check the problem discovered part of the drug and reported it to the Federal Police”.