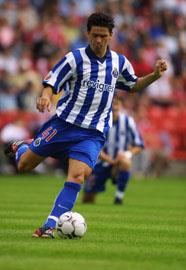 In Portugal, Benfica travelled to Porto for the showdown of the weekend. The champions and league leaders seemed to be cruising following early strikes from Postiga and Quaresma, but the Eagles came back strongly with two second half goals of their own.

A draw looked the most likely outcome when substitute Bruno Moraes rose to claim all three points for the home side with an injury time header. Sporting Lisbon maintained second place, despite falling victim to a similarly late strike in Aveiro, which gave Beira Mar a 3-3 draw.

Barcelona did lose to Real Madrid in the wake of their Champions League defeat by Chelsea, but last weekend the Catalans were back on track with a 3-0 win over mid-table Huelva. Madrid won 3-1 at relegation candidates Nastic to displace previous second placed Valencia, 1-0 losers at Santander.

In France, Lyon have, once more, gone clear of their rivals and look odds-on to become the first European team to claim six successive championships. A pulsating Milan derby in Italy saw Inter beat AC by the odd goal in a seven-goal thriller to reclaim top spot ahead of persistent challengers Palermo and AS Rome. Marco Materazzi hit Inter’s 69th minute winner before being shown the red card for his extravagant celebrations.

Ajax Amsterdam has returned to its accustomed position at the head of the Dutch league, following last season’s upheavals, but in Germany, Bayern Munich’s position of pre-eminence is being threatened by Werder Bremen: a home triumph over their rivals has been sandwiched by two 6-1 away successes in the Bundesliga.

Schalke 04 are the duo’s nearest challengers in a season that has so far seen no less than eight teams vying for top spot.