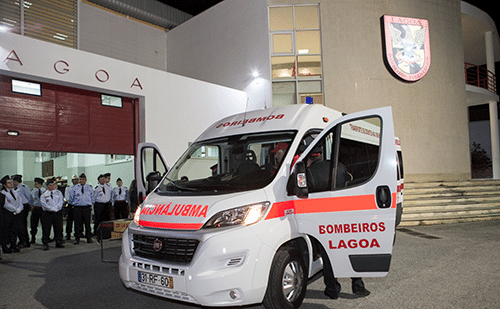 Portimonense travelled to Lisbon on Sunday and managed to all but down mighty Benfica. An earlier training match defeat to Elfsborg at Vale do Lobo did not bode well for Carlos Azenha’s men, but in front of 30,000 spectators at the Stadium of Light, and accompanied by live television coverage, every Algarvean stood up to be counted.

Admittedly, Jorge Jesus had fielded a side featuring plenty of reserve players in anticipation of this week’s Europa League quarter final second leg, but at the same time each one of the Champion’s lesser lights probably cost more than the entire Portimão team put together.

Benfica struggled to find their rhythm as keeper Ventura dealt with any possible dangers between the posts.

Lito served early notice of Portimão’s intent when hitting the bar before home defender Roderick was adjudged to have handled in the area just before the half hour. Captain Ricardo Pessoa stepped up and confidently crashed the resulting spot kick into the top left hand corner of the Benfica net to give his club the lead.

The second half saw the introduction of two of Benfica’s first choice Argentineans and the visitors found themselves largely restricted to counter attacks.

One of these, in the 75th minute, should have sealed a most improbable victory. Moreira appeared alone in front of the Benfica goal and looked certain to score as he lobbed the stranded opposition keeper but the ball struck the inside of the far post and somehow rebounded back into play.

Three minutes later Ventura was forced into a magnificent save which left him prone inside the goal mouth at the other end of the pitch.

In the resulting melee veteran Benfica captain Nuno Gomes managed to force the ball over the line to restore parity and ultimately the final 1-1 score line.

Before the game, Portimonense would have been ecstatic at the thought of bringing back a point from the capital – after the 90 minutes had been played the single point gained felt somewhat meagre in the light of what might have been.

In addition, Setúbal managed an identical draw leaving the margin to safety at five points.

However, now unbeaten in four games, Portimão will go into their forthcoming encounters with Guimarães today (Friday), 8.15pm, Académica (April 3) and then Porto full of confidence.