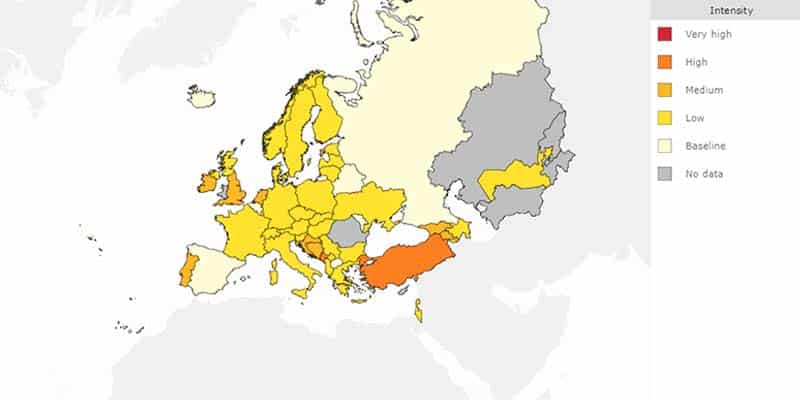 Old people particularly are said to be at risk this winter of the world’s most dangerous strain of flu virus, currently in evidence in Portugal.

AH3 is a sub-type of the seasonal virus that has become particularly difficult to fight because of its ability to mutate.

Say reports, just in one day last week “almost 500 people died in this country”, most of them from complications “provoked by their illness”.

It was “one of the days with most deaths in the last decade”, explains Diário de Notícias, and comes in a month when the average minimum air temperature (1.04ºC) was 3.5ºC less in relation to norms for the years 1971-2000.

Tabloid Correio da Manhã has picked up the story explaining that the death toll over January 14-16 inclusive totalled 1,338, while health authorities are stressing the importance for elderly people to get themselves vaccinated.

Authorities believe the current vaccination – even despite AH3’s ability to mutate – is the best way of being protected, covering those who take it up for the other strain of virus in evidence this winter, AH1.

So far, almost 1.3 million ‘free flu shots’ have been administered to pensioners (over the age of 65), health professionals, pregnant women and the chronically ill with compromised immune systems.

Young children – though at risk – are not the issue, health director Graça Freitas has explained, saying it is “rare” for children to be affected seriously.

Flu News Europe is cited in articles doing the rounds today, stressing that this ‘situation of alert’ applies also to UK, Croatia, Bosnia and Herzegovina, Georgia and Armenia.

But a quick consultation of Flu News Europe’s ‘map’ suggests the alert is only one of ‘medium’ level, with much worse situations in Turkey and Montenegro (see image).

For now, hospitals’ A&E departments are stuffed, with 13.5% of the 34,000 admissions last Friday relating to respiratory infections resulting from people contracting the virus.

Hopes are that temperatures will level out and see less people clamouring for treatment.

Advice in the meantime, includes the need to wash hands frequently, cough or sneeze into disposable tissues “or one’s forearm”, and in cases where people are infected, to stay away from others until no longer feeling unwell or infectious.

Meantime, more protests are expected by nurses, with strikes in different areas threatened throughout the week.