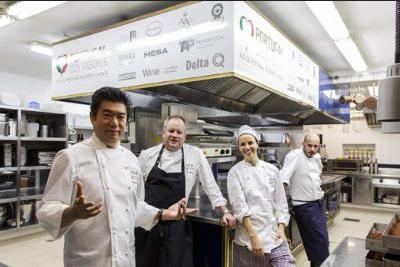 There may have been 90 guests seated in the dining room of the 2-Michelin star Vila Joya in Albufeira – 30 more than expected due to high demand – but the atmosphere remained jovial and the service seamless as 12 of Portugal’s leading chefs came together on March 9 to create a very special meal indeed.

Part of the commemorations of the Year of Portugal in Brazil, this was the only stage of ‘Portugal dos Sabores’, an initiative launched by the Portuguese Tourism Board to promote Portuguese food and wine in Brazil, to take place on national soil.

In the run-up to the two degustation meals hosted by Vila Joya – Night of Brazil on March 8 and Night of Portugal on March 9 – the programme also aimed to showcase some of the best Portuguese ingredients through a range of special activities from March 6-10, including visiting the Moinho dos Ilhéus oyster farm in Tavira, witnessing the dangerous activity of perceve-catching and even heading to Guia to sample something less Michelin but no less tasty: the iconic chicken piri-piri.

The members of the Brazilian press, which included representatives from the magazines Prazeres da Mesa and Vogue, also visited the Alentejo, where they took part in a ‘pignut hunt’ and sampled the wines from Herdade da Malhadinha Nova. A press dinner completed the day, with a meal prepared by Vila Vita’s own Hans Neuner at his 2-star Ocean restaurant.

On March 8, a tasting of the wines from Douro producer Niepoort at Vila Joya preceded the main event: a degustation dinner that saw three of the visiting chefs from Brazil – Helena Rizzo, Daniel Redondo and Tsuyoshi Murakami – join forces with Vila Joya’s own 2-star chef Dieter Koschina and sous-chef Matteo Ferrantino to prepare a seven-course meal, each incorporating Portuguese ingredients with a decidedly more exotic touch.

There was a definite sea theme among the first dishes of the evening, with the typical perceves (goose barnacles) making an appearance on more than one occasion. As well as Avillez’s ‘Cabo da Roca’ and Sinthon’s blue lobster with a dill cream, gravlax and caviar, Neuner’s trademark style, as showcased in his razor clam and Pata Negra dish, was a highlight for many. Flying the Vila Joya flag, Koschina’s dish of tropical pigeon was another talking point, and the meal couldn’t have ended on a sweeter note than with

It was a brief Portuguese interlude in the programme that began in São Paulo, Brazil, in September. Comprising ‘Chefs Duets’ and various tasting events, the ‘Portugal dos Sabores’ programme will culminate with a charity gala dinner in aid of ‘Fome Zero’ (Zero Hunger) in São Paulo on June 10 (Portugal Day).