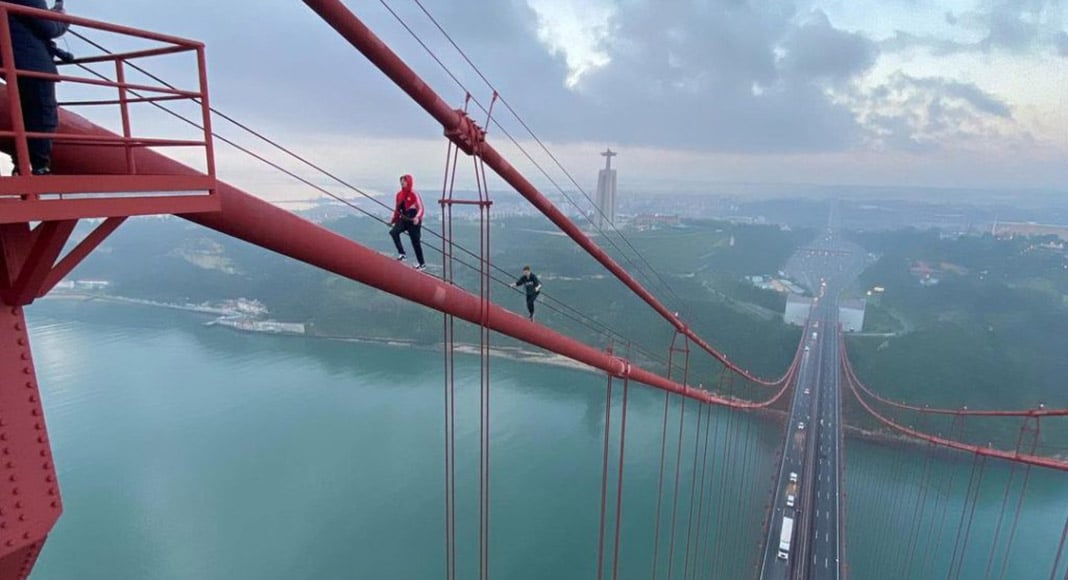 Five young Brits gave earlybird commuters into Lisbon the shock of their lives this week.

The group were scaling the 190-metre ‘pillar 3’ of iconic April 25 bridge, with no safety equipment.

Going by the name of Daringducky69 on Instagram, the 20-somethings were fully aware what they were doing was hugely risky and illegal. But as Parkour enthusiasts, this was part of the adrenaline rush.

They posted online: “25 de Arbil bridge. Arrested for 35+ hours, strip searched, GoPro seized and sent to court. First ever trip out of the UK and very nearly landed in prison…”

For the time being, we don’t know many more details. Who are these young men? What happened to them in court?

The last ‘news’ in Correio da Manhã yesterday was that they were due to appear before a magistrate on the day they had their departure flights booked.

The paper claims the young men told PSP police who were at the bottom of pillar 3 to arrest them as they made their descent that they pulled these kind of stunts all over Europe, and then uploaded videos of their achievements online.

This may have been an exaggeration given the post that said “first time out of UK and very nearly landed in prison”.

Certainly, the explanation clearly didn’t cut much ice with police. The youngsters gained access to the bridge by entering a prohibited area – and they admitted they knew what they were doing was against the law.

Says CM, the five arrived in Lisbon on April 20.

Their exploits have received a lot of enthusiasm over Instagram, it just remains to be seen what a magistrate makes of them.