It is appropriate, therefore, to look back five years to 2017, which will be remembered as one of the darkest years in Portuguese history, as far as the death toll from wildfires in Portugal is concerned.

During that year, there were around 21,000 wildfires, which burned an area of 539,920ha of forests, shrubland and agricultural land, causing 117 deaths.

Of these, two episodes stand out: Firstly, the catastrophic fires in Pedrógão Grande in June that cost the lives of 66 people, followed by the fires in October the same year, which claimed the lives of 51 more.

Safe Communities Portugal monitored the fires at the time, liaising closely with the then ANPC (National Authority for Civil Protection), and has met Professor Domingos Viegas, director of the Association for the Development of Industrial Aerodynamics (ADAI) and of its Centre for Forest Fire Research (CEIF), who has authored the various reviews/investigations of the fires, as well as studying these reports and others in detail.

Five years almost to the day, this feature reflects on the October 2017 fires, which raged from the 14th to 18th. These fires were perhaps unique as the approach of Hurricane Ophelia both exacerbated the intensity of the fires and the rains from the storm on the 17th contributed to the extinguishing of the fires!

On October 15, more than 500 fires started and several of them developed into major fires, burning a very large area (244,000ha) in a relatively short period of less than 10 hours and causing devastation in a much wider area than the fires of Pedrógão Grande. There were seven major complexes of fire, most of them having more than one ignition point and were the result of several fires spreading in the same area.

The year 2017 presented extreme meteorological conditions, with a severe heatwave and extreme atmospheric instability in June, the influence of Hurricane Ophelia and record-breaking drought in October.

These extreme conditions led to a multiplicity of wildfires, many active fire fronts and explosive fire behaviour, contributing to the catastrophic fires in the central and northern regions of the country, with heavy impacts on human lives and property. These critical fire episodes are often referred to as mega-fires or extreme wildfire events (EWEs).

The very dry conditions that were felt throughout the summer of 2017 continued in mid-October with the drought code for Coimbra reaching record values of 800, well above the average value of 400 for the time of year.

The storm winds from Hurricane Ophelia induced a very strong southerly wind that blew hot and dry air from North Africa over the major part of the territory, increasing fire danger during October 14 and especially October 15.

For example, the overall average value of the FWI for Portugal was 62 on October 15, and in Coimbra it reached an all-time record value of 82, making it impossible to control fires that escaped the initial attack.

The information on fire danger conditions provided by the European Forest Fire Information System (EFFIS) indicates the capacity of a fire to ignite and spread, linked to the resources required for fire control.

Fire danger above an FWI value of 50, which was predominant in the whole Portuguese territory during October 15, implies that fires cannot be controlled by either ground or aerial firefighting.

They launch burning material that produces spot fires up to 3km ahead of the fire front, posing a major threat to firefighting crews, and increasing the number of simultaneously active fire fronts. IPMA classification for extreme fire behaviour starts at FWI = 38.

Critical fire events burning in extreme fire danger conditions, such as those described in this feature, can only be extinguished when the weather conditions improve and fire danger decreases.

The five extreme wildfire events of October 15 reached maximum spread rates in excess of 3km/h and up to 9km/h. Between 16:00 on October 15 and 04:00 on October 16, the area burned by these fires in an hour ranged from 7,000 to 14,000ha. Firestorm conditions were felt at night after the cyclone winds had dissipated; they were caused by fire–atmosphere interactions and possibly interactions between fires.

As in the Pedrógão Grande fires, the most severe fire behaviour coincided with the timing of most human fatalities and occurred when air temperature was decreasing and relative humidity was increasing.

In these fires, a much smaller proportion of persons lost their lives while running away from their houses. As the fires spread mostly at night, many persons were surprised by the fire and did not have time to react.

On October 17, there was precipitation in most of the country, decreasing the fire danger and helping to control most fires on October 18, with only minor fires still burning north of Figueira da Foz.

At least one of the fires in October was caused by electrical lines, but the major causes were fire use (36.0%), arson (35.7 %) and rekindling (10.7%); these percentages refer to the total number of fires in the period October 14–15 for which a cause could be determined.

The shape of the fire perimeters indicates wind-driven fires with elongated scars following the direction of the predominant wind when fires ignited; these winds were generated by Hurricane Ophelia.

In June/July 2022, the heatwave produced similar extreme meteorological conditions, with even higher FWI hazards, but with the lesson learned from 2017, over 90% of fires were contained within the first 90 minutes, with far fewer casualties. It is, however, a point of reflection that it took the deaths of some 117 people to bring about the improvements we see today. 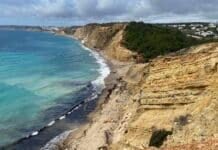