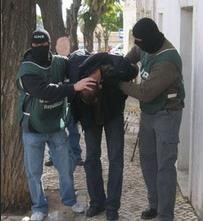 FIVE ROMANIAN men have been arrested under suspicion of being responsible for the spate of violent attacks in eastern Algarve since May 2006.

The GNR announced on January 31 that they had arrested five men in Bordeira, Faro believing them to be responsible for 11 violent break-ins at residencies in Faro, Olhão and Loulé.´

Restaurant owner Teresa Simplicio, who witnessed the arrests, told The Resident that five men entered her restaurant at around 11am and asked if she was serving lunch. She told them that lunch is served from midday so they said they would wait and ordered five coffees.

Teresa was alone in the restaurant at this point, but did not feel threatened as the men acted normally and did not appear strange.

After the men were seated, a Portuguese man came and ordered a coffee and drank it at the counter. Teresa was then joined by her waiter Jorge Estevão.

Shortly after the man at the counter left the premises, six GNR officers arrived, three in balaclavas, three in uniform. They told the waiter that they were police and proceeded straight to the table where the men were sitting. The men were handcuffed with their hands behind their back.

The men did not resist as credit cards and cash were emptied from their pockets into a bag and taken away by the police. The police took the men to their vehicle and homes and recovered more cash and valuables.

Afterwards, Teresa was told that the Portuguese man who had coffee at the counter was an undercover police officer, who had gone to get back up.

Teresa has owned the restaurant for 20 years and has never seen anything like this in the area. Most of her clients are English and Portuguese and she doesn’t believe that there is a Romanian community in the area. The men had certainly never been to her restaurant before. She was shocked by the raid, but positive and said: “It is good news, people in the area will feel calmer now.”

A major investigation involving Faro GNR and the Lisbon CID has been taking place in recent months. As reported in The Resident, the attacks began in May 2006 and, by Christmas, nine had been registered, all in the same region and carried out in the same manner.

The latest two break-ins took place on January 28 and 29, in Moncaropacho and Caliços respectively.

All victims in the 11 incidents have been foreign residents living in isolated spots, the majority of which were British. The police have emphasised that the main criteria behind the attacks was location.

The five men appeared at Faro Tribunal on January 31. The hearing lasted seven hours and, at 11.30pm, the men were all put in preventive detention at Faro Prison.

The break-ins and the acts of extreme violence used have created a very insecure climate in the Algarve, especially in the affected areas.

The Resident spoke with several of the victims of the attacks after the arrests were made.

One man said he was very relieved and much happier however, another victim said the arrests have not made her feel any safer, saying: “This is an ongoing problem, I will not feel safe until I know the gang leader has been caught”, urging residents to continue to remain vigilant.

The gang’s tactics involved breaking into houses late at night, violently beating the occupants before holding them hostage and taking their valuables. They then forced them to reveal their PIN numbers before sending two of the gang members away to withdraw the money ensuring they have the correct numbers.

In one case, a man’s fingertip was cut off and a dog beaten to death. In some cases there were six men involved, causing some to still question whether the police have caught the main instigators behind the attacks. The GNR have contacted some of the victims and revealed that there will be an identity parade in the coming days.

One of the victims has seen the gang leader face to face and their identification should hopefully confirm whether or not he is one of the five men who has been arrested.