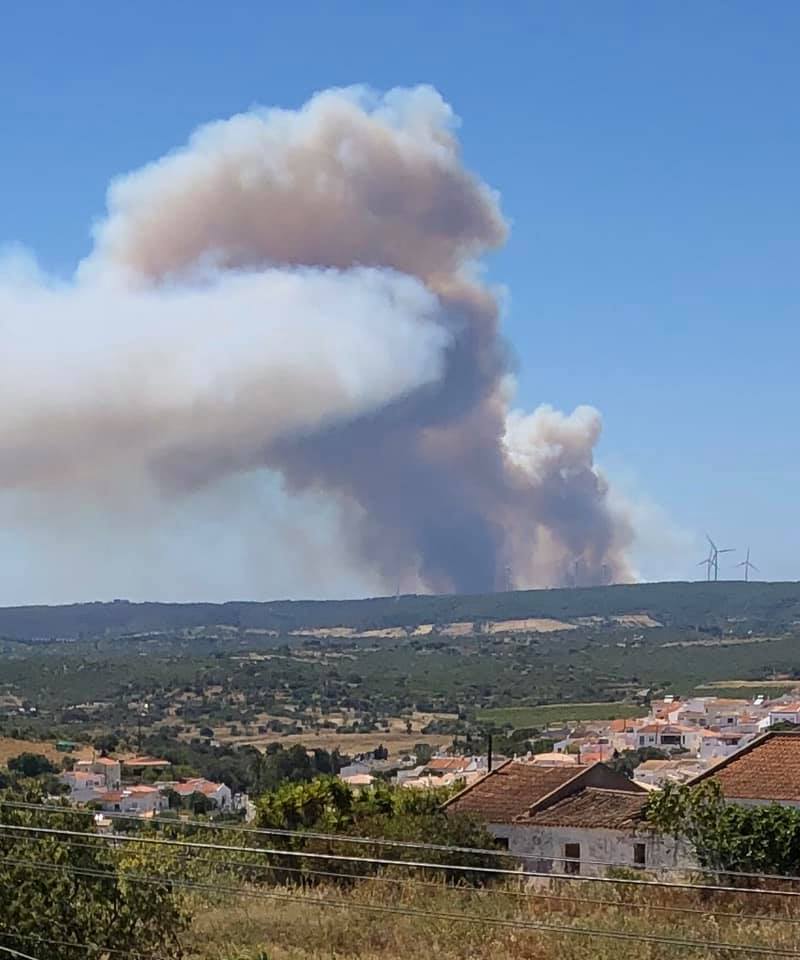 Over 230 firefighters from across the Algarve are tackling a major fire which broke out in Bordeira, Aljezur just before 1pm today.

They are being backed by 10 planes and helicopters and over 70 appliances.

Concerns are that the flames – fanned by strong winds with gusts of between 40-55 kms – are getting too close to homes and property.

30 people have thus been evacuated as a preventive measure.

The blaze is raging ‘intensely’ on two fronts through scrubland pitted with pockets of pine, eucalytus and rockrose (all of which are highly inflammable) around the hamlet of Vilarinha.

The next door touristic hamlet of Pedralva is also potentially under threat, as is the much larger village of Budens, and the Mata Nacional de Barão de São João – the area of forest that leads east towards the villages of Barão São Miguel and Barão de São João.

As water-bombing aircraft work ceaselessly, earth-moving equipment is cutting fire breaks ahead of the fronts.

The fire is being covered by CMTV which has a reporter on the ground. He stresses the conditions are creating ‘lots of problems’ and the fire at the end of the afternoon appeared to be uncontrollable.

Firefighters’ job isn’t helped by the fact that a number of homes in the area are ‘rudimentary’, made of wood and ‘hidden’ for all intents and purposes from sight.

The cloud of smoke caused by the fire has already travelled many kilometres, while the fire itself is straddling three boroughs: Vila do Bispo and Lagos and Aljezur, and was reported to have crossed the EN125 by the early evening.

Updates to follow.  SATURDAY (early morning): Over 460 firefighters reported at the scene, 148 appliances: air support about to go back up. This is the only significant blaze on national territory right now as soaring temperatures have been forecast over the next few days.

9am: Blaze still going on two fronts. Tragically homes have been lost – largely belonging to ‘expat’ foreigners – as well as a number of caravans and motorhomes parked on land. The stretch of fire-damage now exceeds 10 kms. Air support is up to 5. This battle will go on all day. Anyone trying to get to a location in this area will find road blocks on some of the roads, particularly the EN125 between Burgau-Budens, and the dirt track leading from Budens to Pedralva.

6pm: Air support got up to 10 today, with the fire pronounced ‘dominated’ hours ago, but the wind has kept authorities occupied. Flare-ups have come and been dealt with and then reignited again. The situation is still far from over. The latest ‘front’ is nudging towards Barão de S. João, having arrived already close to Vinha Velha (in the Mata Nacional) where there are a number of houses. People have started being evacuated ‘as a precaution’.

One family that has already lost their home in the fire, has had to relocate again from a friend’s home (that escaped the flames yesterday) as that home is now under renewed threat from a flare-up.

Volunteers have been ferrying supplies to exhausted firefighters all through this fire. See ‘Associação Alerta de incendio Florestal /Forest fire’ for details.

Situation report: CDOS of Faro (the district command of emergency operations) will be at the Centro Escolar in Budens this evening at 8.05pm to give the latest ‘up-to-date’ information on how the fire/s are progressing.

Taking part will be the operations commander Vítor Vaz Pinto, Secretary of State José Apolinário (the coordinator of the execution of the declaration of the Situation of Calamity in the Algarve), Civil Protection bosses and the mayors of the three boroughs affected Adelino Soares (Vila do Bispo), José Gonçalves (Aljezur) and Hugo Pereira (Lagos).

For the latter, this week could hardly have been worse. He has had to deal with the fall-out of the illegal party that resulted in a rash of Covid-19 infections, and now this terrible fire creeping into the borough on the wings of the wind.

As to the cause of this blaze, it appears to have been a genuine ‘mistake’: the heating-up of a chainsaw being used to cut wood that sent out sparks that ignited tinder-box dry scrub. The man whose equipment started the blaze tried everything within his power to put it out, but the wind and the inclination of the land saw the situation rapidly career out of control.

SUNDAY: The fire has been declared in the ‘resolution phase’. It’s out for all intents and purposes, but hotspots remain and the danger of flare ups sees hundreds of firefighters still on the ground, backed by over 150 appliances and at least six air support.

Groups have formed over social media to help those who have lost everything: they haven’t been mentioned significantly in press reports for the simple reason these unlucky people were living in homes they had lovingly constructed over years but which weren’t ‘licensed’ or otherwise ‘legal’.

See Facebook’s: Community support after fire, also GoFundMe campaign: https://www.gofundme.com/f/wildfire-support-for-families-al…… and an appeal for Dutch people to sign up to: https://getfunded.nl/campagne/10982-help-de-algarve…