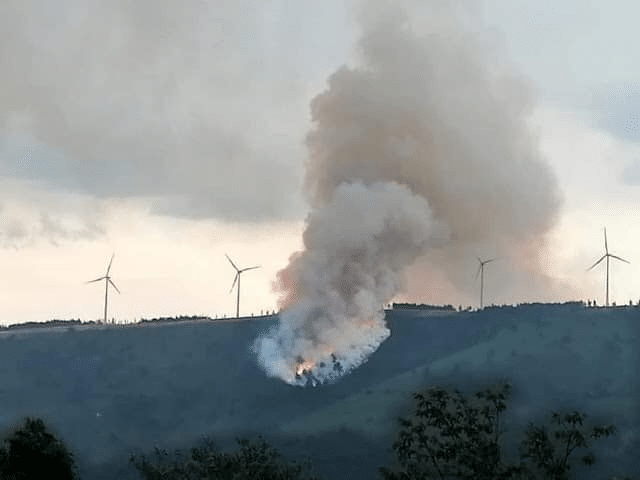 An experienced fire chief died last night – and three other firefighters were injured, one of them seriously – in a blaze in the Serra de Lousã that ‘should have been easy’ to combat.

Investigation is now underway as the President and prime minister have both lamented the tragedy, sending condolences to the dead man’s family.

Say reports, the situation is all the more poignant for the fact that no-one saw it coming.

This was a “normal” forest fire, said a source for firefighters on the ground – not far from areas devastated in the 2017 blazes around Castanheira de Pêra/ Pedrógão Grande that killed 66 people. What seems to have ‘gone wrong’ is that repeated calls by the men encircled by flames took far too long to respond to.

Says Expresso: “They were calling for help for 20 minutes…”

A source told the paper: “This was an easy fire. If they had followed protocol no-one would have died. This was down to the lack of experience of National Command. It’s important that everyone listens to the communications (in which the men can be heard desperately asking for help) to learn what has to be avoided if this kind of situation happens again”.

The office of the ministry for interior administration has already opened an inquiry, lamenting the “tragic moment” for volunteer firefighters who “generously integrate the national effort to defend our forests from fires”.

The dead man has been named as volunteer firefighter José Augusto Dias, 55, attached to the Mirando do Corvo fire station and an employee of the local council.

So far, the names of his injured colleagues have not been released, nor the extent of their injuries.

The fire began a little before 6.30pm last night in the rural area of Trevim not far from a wind park. It appears that Dias and his men were the first team on the ground. A helicopter sent in as first line of attack had doused ‘the head of the blaze’ with the men going in from the left flank. An “operations deputy at National Emergency Command stressed in declarations to Expresso that air support did not have the conditions to act” and it wasn’t long before the first calls for help started being received from the encircled firefighters.

An official from the Lousã firefighting corporation told the paper ‘you could hear the desperation’ even though communications were barely perceptible.

Another failing appears to be that the full complement of men within the team should have been five, but for reasons that will become clear with the investigation, it went in one man short.

More on this story as it develops.

The fire itself was brought under control later in the night. It appears to have been caused by a dry thunderstorm of the kind that have been battering the area, along with high winds making combat efforts all the more difficult.

Over 250 firefighters fought this particular blaze with around 70 appliances.  Warnings are that more fires could come as a result of unstable weather conditions in the central region.

José Augusto Dias has been described as a ‘deputy fire chief’ of Miranda do Corvo, with 39 years experience.

Three days of mourning have been declared by Miranda do Corvo municipality.