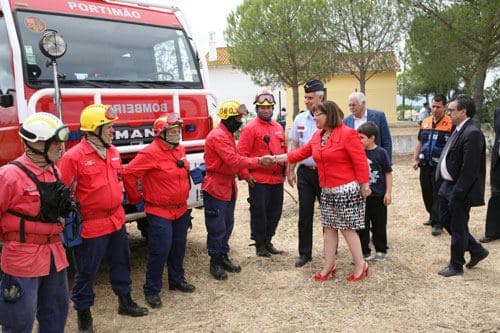 Portimão || Forest fires need to be tackled as soon as possible. Thus, with this in mind, a municipal fire brigade has moved into new headquarters located in the countryside community of Senhora de Verde. The inauguration of the new premises, at the local disused primary school, took place on July 1 and was attended by Portimão Mayor Isilda Gomes.
The initiative aims to place firefighters closer to the source of potential wildfires and will operate daily from 1pm to 7pm – the time-period most prone to forest fires – until September 30.
The 10-man force stationed at the new HQ, which has been adapted to suit their needs, includes municipal volunteer and professional firefighters, who are assisted by two vehicles.
During the inauguration, Richard Marques, municipal fire department commander, said: “Although forest fires only accounted for 1% of fire cases in the area last year, they are by far the hardest to tackle.
“Therefore, it is vital that we base ourselves closer to the source of these fires, thus reducing our response time by about 10 minutes, which can make a huge difference.”
Mayor Isilda Gomes praised the initiative and said she “will not hesitate to take all the necessary measures to ensure the safety of people and property”.
Gomes also stressed that forest fires have a negative impact on the local economy as they are “reported on by foreign media”, affecting the region as a tourist destination.