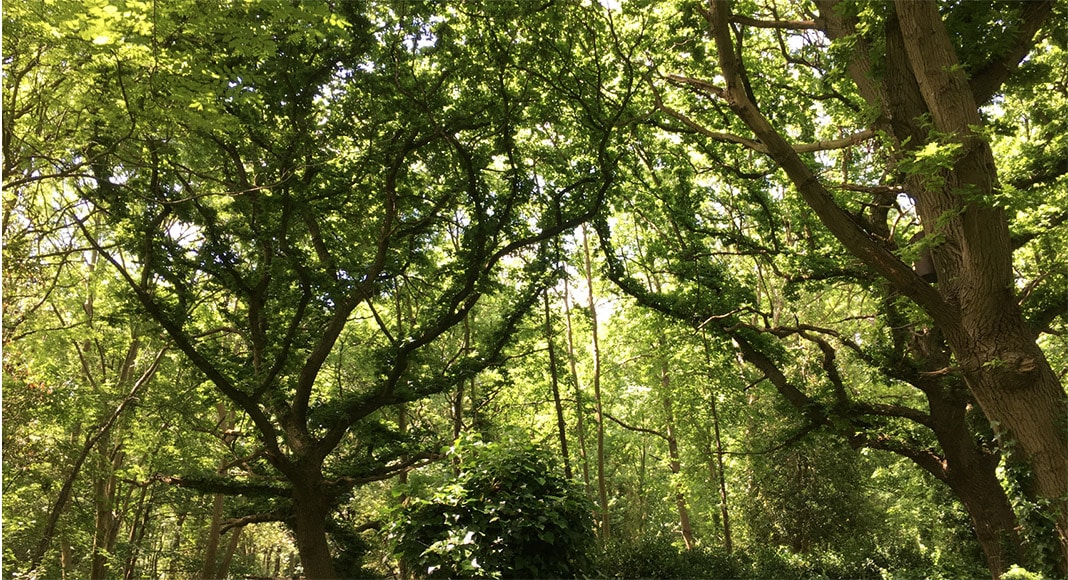 Whether in London or the Algarve, we are in what are known as the “dog days”. The Dog star Sirius is now at its highest in the sky, hence the title. There is normally little news; politicians go on holiday and the world sleeps under the heat of the noonday sun. In ancient Greece, this time was known as Halcyon Days, when the Adriatic was so calm that the kingfisher (Halcyon), or guarda-rios, could build its nest on the sea. But here the Atlantic is no Adriatic!

Armed with our book of poetry, to which page do we turn to feel the warmth and languor of the season? I suggest to Kipling’s Rewards and Fairies in which “The Way Through the Woods” is written.

This is the time then “of a summer evening late” to be entering Markyate woods and looking “underneath the coppice and heath, and the thin anemones”. To be exact, we are in Rushlake Green, near Burwash, where Kipling’s home Batemans lies. He bought the house in 1902, a small Jacobean Manor, with 1634 inscribed over the door. The poem was written eight years later. By then, he knew and loved the area well.

It is a poem one learns as a child. As one gets older, the detail of the wood becomes more vivid, its foliage more dense, and the last line sadder still – ”But there is no road through the woods”. Through a lifetime of recitation, one has come to believe it is a well-trodden path; its nonexistence jars.

Whilst in the Steven’s poem we looked at several weeks ago, the sound of the wind summoned the mysterious woman on the beach, the picture Kipling paints allows one to hear “the beat of a horse’s feet, and the swish of the skirt in the dew, steadily cantering through the misty solitudes”.

Kipling’s poem is a redemptive poem about the power of nature to win back its own, in the face of man’s depredations. It is a positive read amongst so much bad news on Covid. On a personal level, it lets nature act as a healer to the mind in the way that, thank God, in most cases, it acts to heal our bodies.

A brilliant writer, in communion and love with his surroundings, tucks this gem away in a book for children laced with the magic of Puck of Pook’s Hill.

But the story I now have to tell is truly the work of Puck!

My life in the UK was that of a solicitor in private practice. During “articles” one moved amongst departments, if the firm was large to see “where the cap fitted”. The best thing about conveyancing, where I found myself for six summer months, was, if the property merited it, to go for a “view” to check on any rights or easements over the property.

My firm’s client was an Australian lady buying a substantial property in Marklye at Rushlake Green, near Burwash. The time was high summer, many moons ago, and the chance of a day out of the office pure joy.

But Puck had more up his sleeve than this. Part of the demise of the house were acres of woodlands, Markyate woods and, of course, we walked them. I turned to my client, recited easily “The Way Through the Woods”, which she had not heard before, and took the train back to London, elated.

Only Puck could have planned three days later that I should receive from her Rewards and Fairies with the bookmark safely placed on the page of the poem. Of such moments the magic of life is made, and pray God that the road will always remain open, well beyond Covid, to the coppice and heath of Rushlake Green, in deepest Sussex!