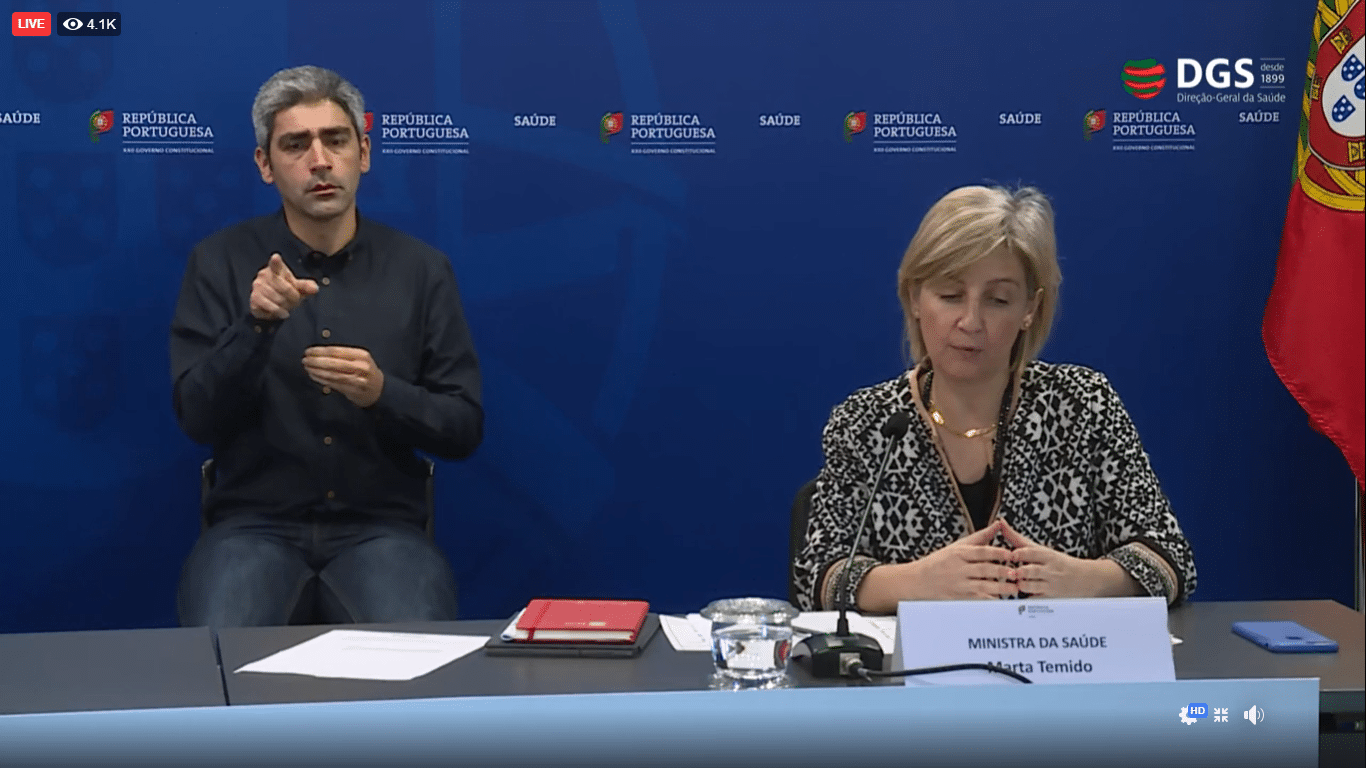 With the latest press briefing on steadily rising numbers, news has come through of the death of a 14-year-old boy from Ovar who reportedly suffered from an auto-immune condition.

He was admitted to the Hospital de São Sebastião in Santa Maria da Feira yesterday (Saturday).

Mayor of Ovar Salvador Malheiro told reporters the child “had not been confirmed as having (new coronavirus) infection but after being taken into hospital and being tested, the test came back as positive. He did already have health problems”.

Noticiasaominuto describes those problems as psoriasis, an auto-immune skin condition.

Answering questions today, both health minister Marta Temido and DGS health director Graça Freitas said it was much too soon to say that the child had died specifically from the virus, as his clinical situation was ‘complex’.

Further investigation into the case will be going ahead and for now the boy’s death has not been included in the daily update, showing a total of 119 deaths and a further 792 people who have tested positive.

The DGS figures have already been uploaded onto their site and can be seen here.

The ‘worst affected areas’ remain the north and those around Lisbon, but numbers are creeping up everywhere, with the Algarve now registering 108 positive cases (as well as the two deaths that have taken place), and the Alentejo showing 41.

Over 5,500 people are currently awaiting the results of tests, while the numbers being treated in hospital (indicating patients too seriously ill to recover from the virus ‘at home’) is up to 486 – 138 of which are in intensive care.

The so called ‘percentage of lethality’ of the virus overall is currently pegged at 2%, but rises now to 8.1% in the over-70s.

Yesterday the ‘percentage of lethality’ for the over-70s was given at 7.9%.

In other words, the risk to the elderly is becoming more acute, hence authorities’ warnings to the general public to comply with the ‘State of Emergency’ measures of self-isolation being so important.

Much of today’s press briefing was given over to advice to all those caring for the elderly within the community to bring in strict rules to ensure their safety.

Meantime the mayor of Ovar – the area still covered by a ‘State of Calamity’ due to the high number of cases within the borough – has reminded reporters that the effects lockdown imposed 11 days ago won’t be seen for some time yet, bearing in mind positive cases take two to three weeks to ’emerge’. He stressed that he thinks positive cases will “increase a great deal” as testing continues, and repeated requests for help from the health ministry.

Pre- today’s press briefing, the mood of the press has changed dramatically over the last 24-hours with Expresso carrying a story on how the associations of doctors, nurses and pharmacists have actually accused the government of ‘lying’  – particularly when it comes to vital supplies of medical material coming through (see separate story).

The inference that Portugal’s situation may not be as it is being presented has also been highlighted by the mayor of Ovar, who posted last night on Facebook that the number of positive cases in his borough is “almost double” the figure announced by DGS health authorities yesterday.

“The situation in Ovar continues to be very complicated and infected patients in serious or very serious conditions are starting to appear”, he wrote last night. “We really need help from our health ministry. Meantime, the up-to-date number of infected confirmed at this time by the municipality is 101, which is quite a bit different from the 55 announced today”.

Carehomes too have been reporting serious situations, with dozens of elderly inmates showing signs of infection and being shipped out to waiting hospitals.

Midday today saw prime minister António Costa on a visit to Lisbon’s Curry Cabral hospital which is now exclusively given over to treating patients suffering from the virus. It was a clear ‘damage limitation’ exercise backed by the hospital hierarchy which insisted there was no lack of any medical equipment or necessities.

Figures released as Mr Costa was giving a short press conference show that positive cases now are just under 3,000, representing a 27% increase on those recorded yesterday.

A report from today’s press briefing will follow shortly, but it is clear from diagrams released over national television that the numbers of infected now in the Alentejo have leapt to 12 (from yesterday’s 6) and those in the Algarve have also increased to 62 from yesterday’s 46. The only ‘saving grace’ here is that all cases are in the boroughs already affected: Portimão (11 cases), Lagoa (4), Silves (3), Albufeira (17), Loulé (7), Faro (17), Tavira (1) and Vila Real de Sto António (3).

80% of deaths have been in the over-70s, which is why authorities are trying so hard to ram home the message for this age-group to ‘stay indoors’.

Talking outside Lisbon’s Curry Cabral Hospital just before the press briefing began, the prime minister stressed that more than anything right now, “more than numbers and all the questions being asked, is the need for enormous discipline”. Citizens must remain under the “maximum possible isolation” as the country enters the most critical phase of this outbreak: that of ‘mitigation’ in which community transmission is underway. Not explosively, stresses Graça Freitas of the DGS health authority, but dangerous nonetheless.

The next few days will be pivotal in seeing where this pandemic, in national terms, is headed.

Tuesday’s ‘Covid-19’ press conference presenting data from the last 24-hours managed to get itself into something of a mess.

First it was reported that there had been six deaths up till midnight last night. That number suddenly changed to seven, and now it is at 10.

The confusion stemmed from data being used that hadn’t been fully updated.

In total however, infections have been established in 2,362 people – representing an increase of 302 on yesterday’s totals.

Testing is continuing – perhaps not as widely as the public might like, thus figures will be constantly changing.

Today’s press briefing was ‘more aggressive’ than usual in as much as journalists kept pressing for further details. Who were the latest dead, for example? (Well, that was complicated as they kept increasing). Were they elderly people in care homes?

None of the answers really satisfied.

We heard there are currently 203 people interned in various hospitals, 48 of them in intensive care.

The north of the country continues to be the most affected, with 1,130 cases of the virus and nine deaths.

Lisbon and Vale do Tejo comes next with 852 cases registered and eight deaths.

The centre of the country has 293 cases and has suffered 11 deaths.

The Algarve now has 46 cases (only one death so far, last week), while cases in the Azores and Madeira are unfortunately increasing by the day: 12 in the Azores so far, 11 in Madeira.

The Alentejo, this far the area with the fewest cases, has now registered six people with the virus, all of them understood to have contracted it via someone who had recently returned from ‘abroad’.

For the first time, the DGS health directorate has listed municipalities affected by the pandemic: Lisbon is the city with the most cases (175), followed by Porto (126), Maia (104), Vila Nova de Gaia (68) and Valongo (65).

Today’s panel was without the familiar (somehow comforting) face of Graça Freitas. Instead the DGS health directorate was represented by Diogo Cruz, the deputy director working alongside Ms Freitas – while the health ministry was represented by Secretary of State António Lacerda Sales.

The ‘good news’ was that supplies of ventilators are increasing all the time – with 500 purchased by the government from China expected over the course of the next few weeks up to April 14.

The ‘not so good news’ is that the country is most definitely now in the ‘mitigation phase’ in that community transmission is in clear evidence.

Nonetheless, last night on national television prime minister António Costa insisted that  the health system is not in danger of collapse, nor are we anywhere near the point of running out of necessary supplies and materials.

“We will not lose control of the situation”, he told his interviewers, stressing nonetheless that “we cannot create the illusion that we will get through this without pain”.

Meantime, the way Portuguese hospitals deal with positive patients is changing to ensure only those with the most serious symptoms are interned.

Another new development is that anyone now showing signs of a persistent dry cough and fever will qualify for testing.

Pressure to test people who are not showing symptoms has been rejected this far for being likely to create a ‘false sense of security’.

In the wider sphere, four planes will be leaving Lisbon today for Germany, Brazil and the UK evacuating stranded cruise line passengers from the multideck behemoth ‘MSC Fantasia’.