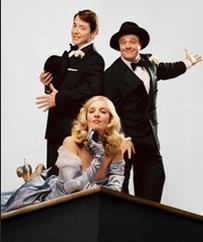 THIS IS a film that comes with something of a pedigree – Mel Brooks’ 1968 original film, a comedic masterpiece, and his over-the-top Broadway musical, among the biggest Broadway hits in recent memory. Now, director Susan Stroman recreates the stage version for the big screen, retaining most (but not all) of the hilarious mayhem that has entertained thousands of theatregoers.

The Producers is a movie based on a play that was based on a movie about a play. Lane plays Max Bialystock, a down-on-his-luck producer whose most recent play, Funny Boy, has just closed after one performance.

One performance is about his limit – the audience and the critics’ reactions are so savage that any further exhibitions are prevented. Yet, he remains afloat by wooing little old ladies to back his plays, since they’re old, wealthy and lonely enough not to care if their investments are ever returned.

Leo Bloom (Broderick) is the accountant assigned to go over Max’s books and, while thinking aloud, he realises that if you don’t mind breaking the law, you could make more money with a flop than with a hit.

They devise the perfect plan, embezzle more money than they need to produce a sure-fire Broadway flop from little old ladies and then, since no one will expect anything back, they can pocket the difference. They find the worst play ever written, Springtime For Hitler by Franz Liebkind (Ferrell), a neo-Nazi playwright and pigeon lover, who is thrilled that someone wants to produce his love letter to Der Führer. What else do you need? An awful director of course, and Max and Leo find the worst. Roger De Bris (Beach), a flamboyant purveyor of fluffy mass entertainment, aided in matters theatrical and personal by Carmen Ghia (Bart), is chosen to direct the flop of the century.

However, their plan fails miserably, Springtime For Hitler is a huge success, audiences see it as an ironic spoof of Nazism, not as the celebration of it that Franz Liebkind intended. To complicate things further, Ulla (Thurman), Max’s Swedish secretary and a would-be showgirl, falls for Leo.

There’s no business like showbusiness and The Producers is full of it – plenty of show, ultra camp humour with glitz and glamour, but throughout the all-important themes of loyalty and friendship shine through.

Watching Nathan Lane and Matthew Broderick in their award-winning performances is a treat. Lane sparkles as the sardonically shameless producer who lies, cheats and has sex with potential investors to make a buck. Broderick epitomises the non-entity accountant, whose paranoia is channelled in the blue security blanket he tucks away in his pocket. Together they’re brilliant. Thurman is a dream as Ulla, the Swedish beauty who definitely has got it and flaunts it as she “tidies oooop” around the office. Will Ferrell is the film’s biggest surprise as the nutty Führer follower Franz Liebkind, who delivers an insanely manic performance as he spits and shouts his allegiance.

When Brooks conceived his comedy satire in 1968 starring Mostel and Wilder, the idea of ridiculing Hitler was brave to say the least. After the film, he expanded the story into a Broadway musical (2001) starring Lane and Broderick, which won a record 12 Tony Awards. Nearly 40 years later, its theme still leaves bite marks.

Stroman, in her debut as a film director, captures most of the frenetic energy of the stage show. This, coupled with the fact that Lane and Broderick worked opposite each other for several hundred performances in the Broadway show is evident, and makes watching this film like watching an old movie – a raucous, randy old movie.

Like most good movie musicals, there is no attempt to make it seem real. Such an effort would be useless, because no scene that involves people spontaneously breaking into song is ever going to be real.