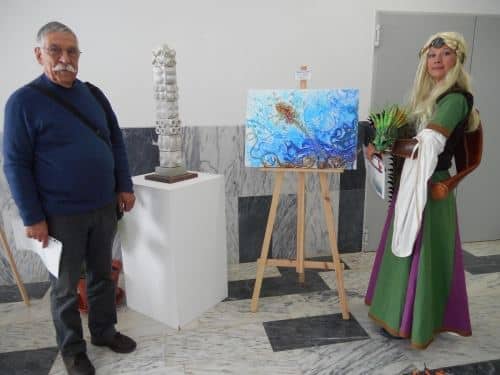 Fiesa, the International Festival of Sand Sculptures, will open to the public on April 15.

Sand sculptures have started taking shape in the Fiesa grounds near Pêra with several international artists working to bring to life the popular Algarve festival.

Animalândia (The Animal Kingdom) is the theme chosen for this year, which aims to recreate an imaginary world where animals laugh at humans, take over cities and embody the typical behaviour of men.

Humour is the main component of the ninth edition of the event, which also includes animal figures ‘immortalised’ in cartoons and fables and fairy tale stories.

A spokesman from the organisation told the Algarve Resident: “This year we have new features. Firstly, the public can watch daily, until June 9, the construction of a small part of the enclosure, demystifying the secrets of the art of sand sculpting and providing the opportunity to interact with sculptors from various countries.

“Visitors will also have the chance to pick their favourite sculpture by voting online or at the premises, between June and August, plus we have scheduled a number of other interactive cultural activities,” he added.

Fiesa is considered the largest event of its kind in the world, using 40,000 tonnes of sand annually sculpted by around 50 skilled artists, covering an area of ​​15,000 square metres with some sculptures reaching 12 metres high.

Fiesa will be open to the public until October 15 and during the summer it will be open between 10am and 11pm. From April 15 to June 9 and September 15 to October 15, the exhibition opens its doors from 10am to 8pm. For more information, please visit www.fiesa.org (only available in Portuguese).
1″>news