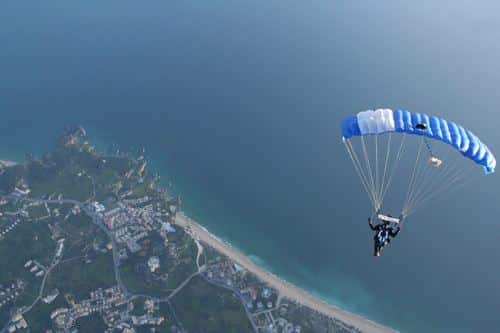 Event || Around 350 skydivers from all over Europe are expected to take part in the Boogie Head Rush 2.0 skydiving festival which will be held between September 20 and October 14 at Portimão’s municipal aerodrome.
The event – organised by Paralvor and Skydive Algarve – will feature former freestyle skydiving world champion Nils Kløcker Predstrup as well as a few hundred skydivers from Germany, Austria, Switzerland, Norway, England, Scotland, Ireland, Spain and Portugal – all of them accompanied by their families.
The local council has said that the event will help bolster the local economy, especially the “hotelier, restaurant, car rent and trade sectors”.
It is yet another internationally-prestigious skydiving festival for the aerodrome that has seen its prestige growing since it came in fifth in a list of Europe’s ‘top-10 dropzones’.
One of the last events, however, was marked by the tragic death of a 40-year-old German skydiver, during the Spring Boogie Festival, and injuries to two others.
www.skydivealgarve.com