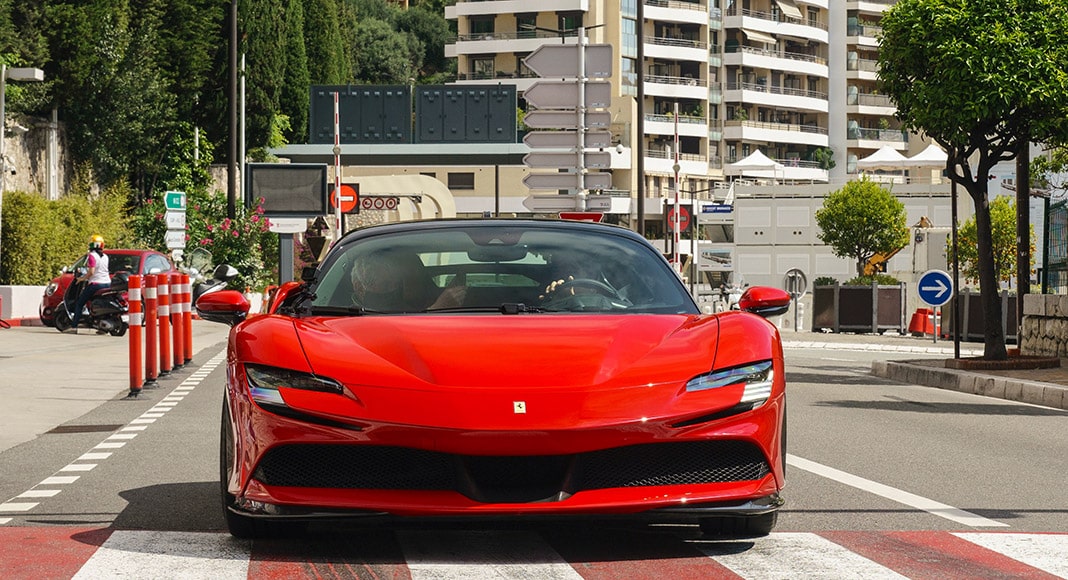 There is a new Ferrari in town, but blink and you will miss it. Because the SF90 Stradale redefines what performance means.

Press drives are slowly returning to normal in Portugal. Press launches, on the other hand, may never return to what they used to be. Brands are live streaming the presentation of new cars and it seems to be working fine.

Why spend millions in logistics, hotels, flights and food when you can just video stream the message you want to get across? I think that amongst the many things that will change in the car industry in the next two years, press launches will probably be one of them.

Because of my specific family circumstances, I am not able to drive new cars at this point, so I will have to find interesting subjects on which to keep the Motoring section interesting.

It’s actually not that hard. Not when there is a new series-production Ferrari with 1000 horsepower out and about. Yes, you read that right: if you have around €600,000, you can walk into a Ferrari dealer and order yourself a road car with as much power as the Prancing Horse’s Formula 1 machinery. The mind boggles.

The 2013 LaFerrari was limited to 499 units at a price in the region of €1.2 million-€1.7 million depending on local taxes. Its naturally aspirated V12 and its electric motors produced a combined output of 986 horsepower, but the LaFerrari didn’t have a pure electric mode – the electrons were there solely to improve outright performance. It is a masterpiece and today they come up for sale at sometimes double the retail price.

Except nowadays whoever pays circa €2.5 million for a LaFerrari is sure to come second in the list of owners of the fastest Ferrari ever. You see, a mere seven years down the line, Ferrari have mated the V8 block from its F8 Tributo, powering the rear axle, with twin electric motors, powering the front axle, to create a Hybrid V8 that is faster than the car Ferrari thought it was so good they called it ‘The Ferrari’.

The SF90 Stradale is the fastest car with number plates ever to come out of Maranello. And it’s so technologically advanced and complex, journalists invited to drive the car at Italy had to watch a three-hour presentation online to understand what they would be driving. I am not one of them. Nor is any other Portuguese hack. In a country that sells 20 to 25 Ferraris a year, the brand doesn’t see much point in spending money around these parts and who can blame them?

Let’s dive into the details. The SF90 has an aluminium chassis and the same engine block as the F8 Tributo. From there, things are quite different: turbos, cylinder heads, pistons, crankshaft, inlet and exhaust manifolds – they’re all new. The engine is 25kg lighter than the F8’s and it’s the first Ferrari V8 with direct injection.

Without electric assistance, the SF90 would boast a power figure of 780 horsepower. Not too shabby I’d say. Spec the Assetto Fiorano pack and the dry weight of 1670kg comes down 30kg. Your bank account comes down by around €50,000 in that case as well. Carry on ticking all the weight-saving boxes like carbon wheels and a further 70kg can be trimmed off the car. Your wallet, needless to say, will also be much lighter.

Performance is not really of this world: 100km/h in 2.5 seconds, 200km/h in 6.7 seconds. It’s the fastest Ferrari around the brand’s Fiorano private circuit, a whole second quicker than ‘The Ferrari’. When compared to the car that was fastest a mere decade ago, the 599 GTO, it’s five seconds faster. Five!

Driving modes are pretty self-explanatory: eDrive, Hybrid, Performance and Qualify. I am guessing Qualify is not your ideal commuting mode. eDrive is good up to 25km and 135km/h and Ferrari says it will be used by owners who don’t want to wake up the neighbours in the morning.

The new eight-speed twin-clutch gearbox sits behind the engine and shaves 10kg off the old seven-speeder. How? No reverse gear needed. Whenever you have to back the car, it will engage electric mode – and even if the battery is drained, the V8 will be switched on to recharge it. Clever stuff. And gets cleverer: the electric motors are so tiny, they weigh only 12kg each – but remember, they produce 220 horsepower!

Sadly, at least for a Ferrari purist such as myself, the mechanical central rev counter is gone in favour of a 16-inch screen operated by a thumb swipe pad on the steering wheel.

On the new, more restrictive WLTP test cycle, the SF90 Stradale emits 154g of CO2 per km. That’s impressive. The 599 GTB of 2006 was a 490g/km car on a much less comprehensive test at the time. Rumour has it the real number was almost twice as high. Magnificent car though.

And so is the SF90. Another brick in Ferrari’s unique and magical wall. I wish I could drive one someday. I wish you could too. 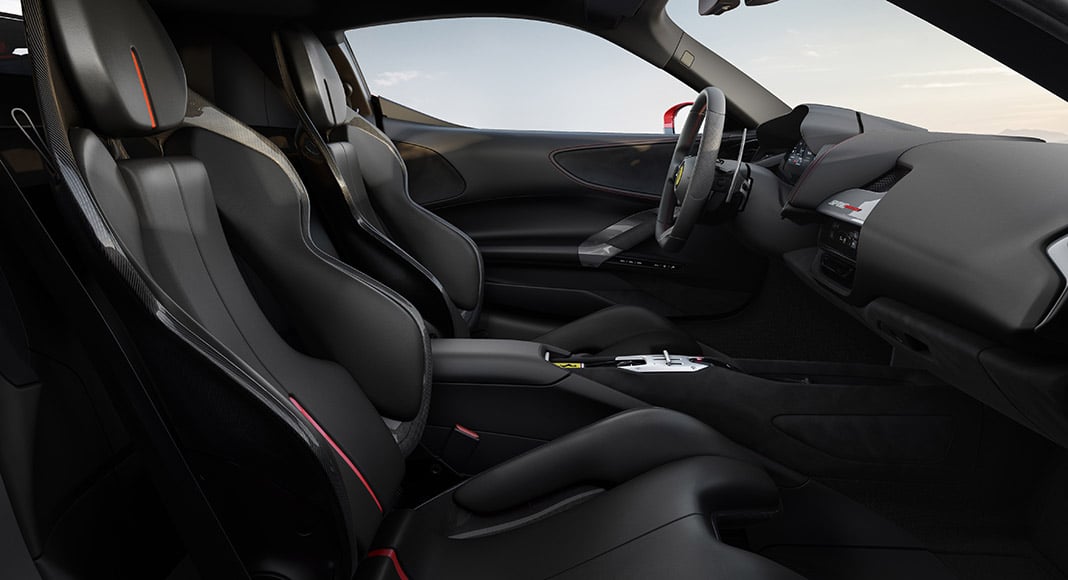 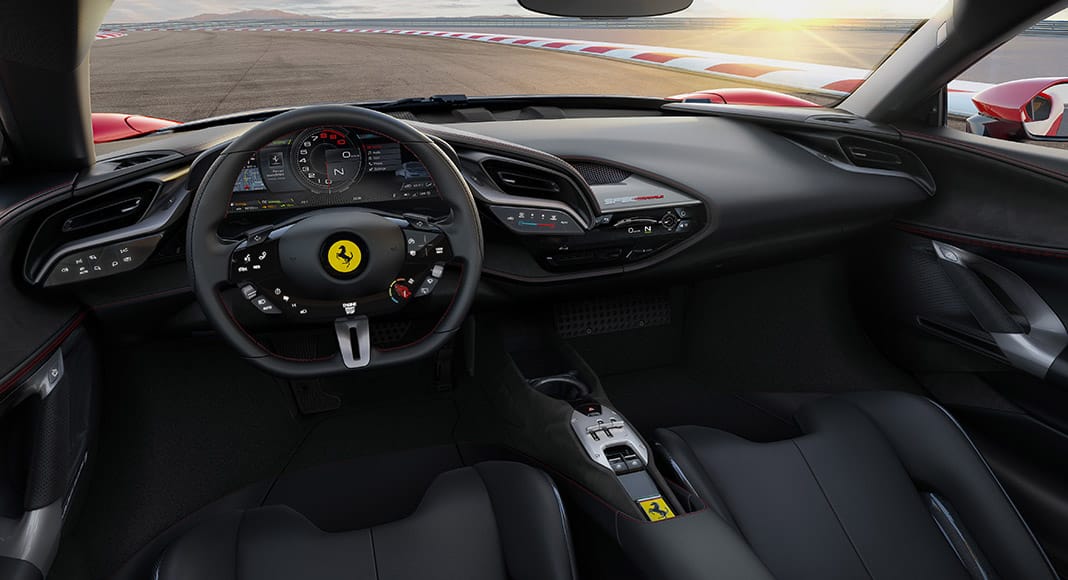