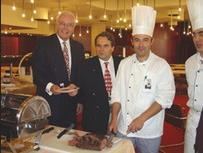 THE HIGHLIGHT of the European Parliamentary session in Strasbourg this month was a special feast.

Arranged by fellow Conservative MEPs, it was a barbecue of British beef to celebrate the final lifting of the ban following the BSE outbreak. At last, British beef farmers have some good news. Sadly, this does not offset the bad news most have been suffering all year.

Under the EU Common Agricultural Policy, farmers are entitled to an annual payment depending where they are, what they do and how they do it. Farmers make their claim by mid-May for the calendar year, and should get paid by that December. In Portugal, and indeed in every EU country except one, farmers were indeed paid by December. The one exception has been England.

The reason for the non-payment is that our government, led by DEFRA Secretary of State Margaret Beckett, decided to impose a uniquely complicated and bureaucratic system just for England – against the specific advice of the European Commission. Scottish and Welsh farmers have been paid. Many farmers in England are still waiting.

For some farmers, the missing cheque may account for half their total yearly income. I know of farmers going bust because of non-receipt of their cheques. I know of farmers re-mortgaging their farms, or cashing in their pensions, because of non-payment of their cheques. I know of agricultural supply businesses throughout the region, facing crisis through no fault of their own, as their customers cannot pay them because they have not been paid themselves. It is a human tragedy of immense proportions. It is also a tragedy for the whole rural economy.

In any normal business, the person responsible would have been sacked. Labour colleagues tell me that when Margaret Beckett was summoned to Downing Street ahead of the reshuffle, she confidently expected the chop. Apparently, she could not believe she was being promoted to Foreign Secretary. Neither could they.

EU policies can indeed have their faults, and some of us are working hard to address them. But there is no excuse for faults made at home, especially faults that continue un-admitted and un-repaired. It is time all political parties put the health of the rural economy at the top of the agenda.

I have welcomed the appointment of David Miliband as the new Secretary of State. I have told him that I genuinely want him to succeed. As I was the only politician from any political party to attend a recent crisis meeting at the Royal Agricultural Society HQ, I have also urged him to come personally to the heart of England within the coming weeks as part of his briefing process.

I hope he comes soon. And I hope he brings his chequebook ….

and Conservative Spokesman for Employment and Social Affairs