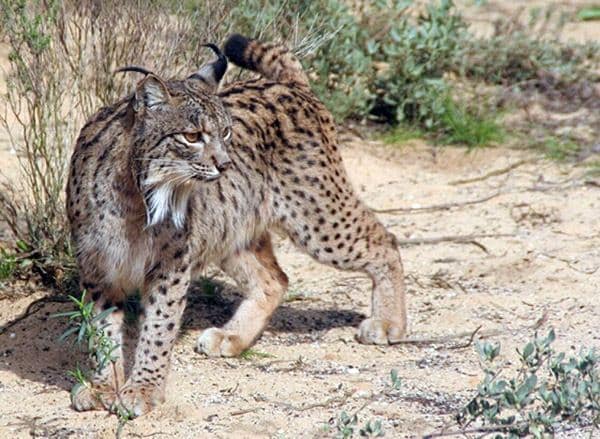 The much-publicised Portuguese breeding programme designed to help save the Iberian Lynx – the world’s most endangered feline – from extinction is poised to release eight big cats into the wilds of Mértola. The grandiose statement came last week, but some feel it has been powered by politics. They say the truth is that conditions could be all wrong – and the whole experiment could end up back at square one.
Much depends on a cyclical scourge among wild rabbits, known as VHD (viral haemorrhagic disease).
As Público newspaper has reported, if rabbits “don’t resist a new outbreak of VHD”, the Lynx’s return to the wild will be severely compromised.
“The situation is far from ideal,” António Soares, president of the national association of hunting land owners, told the paper.
And, for once, environmentalists are aligning themselves with the hunting fraternity.
In a statement issued last week, Quercus said the September date given for the release of eight adult lynx into the Guadiana Natural Park near Mértola, on the Alentejan borders with the Algarve, was far too soon and “not sufficiently transparent”.
Citing doubts over the sustainability of the wild rabbit population in the area – and indeed in other areas chosen for future introduction of the lynx – Quercus said: “Considering the proximity of next year’s legislative elections, the fear is that there may have been an attempt to politically manipulate this whole process.”
The “lack of available information and the unjustifiable urgency (for lynx reintroduction)” has prompted queries to the ICNF (the body in charge), but up until now “there has been no response”, adds Quercus.
Environmentalists’ concerns – added to the hunters’ list of doubts and fears, which centre on the sustainability of the lynx’s preferred diet of wild rabbit and how hunting could be curtailed if rabbits start dying out – have been swept aside by Secretary of State for Territorial Planning and Nature Conservation, Miguel de Castro Neto.
Neto maintains that the process of reintroducing Lynx to the wild “is so important, and had such a huge investment by so many people over so many years” that the government would not make decisions “without having absolute certainty” that all the right conditions were in place.
It is an affirmation that has left hunters and environmentalists unconvinced.
According to Público, both groups consider the government is more concerned with “simply releasing the lynx – an act with strong symbolism”.
Hunters particularly say the government should invest much more in the recuperation of habitats and rabbit populations.
Even more ominous is Quercus’ warning over another consequence of lynx reintroduction: “We really don’t know how compatible the species will be with agricultural/forestry activities as information has been excessively simplified.”
Glossed over too has been the likelihood of farmers and herders ultimately killing the lynx if the big cats start foraging for food “too close for comfort”.
“It is what happened in the past,” zookeeper Paulo Figueiras told us. “People who have chickens and farm animals will put down traps – it’s human nature.
“If the rabbits run out, the lynx will need to find food elsewhere – and that’s where the problems will really start to manifest,” he told us.
“Other issues are roads, and fences. Fences around private land, or even State land, mean that the lynx cannot move freely – which they need to do if they are to find enough food.”
Thus, as the clock ticks towards September, the much-heralded return-to-the-wild of the Iberian Lynx in Portugal is still fraught with variables, and by no means guaranteed.

An Iberian lynx was photographed in western Portugal following an incredible 250 kilometre journey from Spain, the ICNF reported in June last year.
The photographs, captured by a camera trap in Vila Nova de Milfontes near Odemira, on the west coast, came as a surprise as no lynx had been seen in the area for decades.
In an exemplary case of inter-agency cooperation, the hunting association that took the pictures passed them straight to the Portuguese environmental protection authorities and the ICNF, which immediately set out to learn more.
Eighteen days later, the lynx was photographed again – this time in daylight – and was identified as a two-year-old male known as Hongo, originally from Doñana National Park in Andalucía.
The news was greeted as a “huge morale boost” for conservationists who have been working so hard for the animals’ survival.
By NATASHA DONN news@algarveresident.com