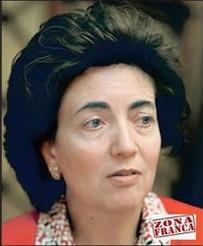 CONTROVERSIAL MAYOR Fátima Felgueiras, who fled to Brazil over the ‘Saco Azul’ (blue bag) case, is to stand trial for 23 indictments.

Last Friday, a court at Guimarães confirmed that it would pursue the case, ordering the mayor to surrender her Brazilian passport within 24 hours.

Despite the fact that initial evidence from recorded telephone conversations and the testaments of witnesses Horácio Costa, Joaquim Freitas and António Bragança da Cunha, who were formally charged in the case, have been contested, a judge has ruled that there is sufficient evidence to proceed with the case.

Fátima Felgueiras stands charged with five counts of using her position to engage in business deals, six of passive corruption in illicit acts, four crimes of abuse of power, three of prevarication, and two crimes of bribery and embezzlement when she was President of Felgueiras Câmara.

Voted President for a second term in the last local council elections (October), Fátima Felgueiras also has to respond to two crimes of accepting bribes. Another 15 defendants will stand trial alongside the mayor.