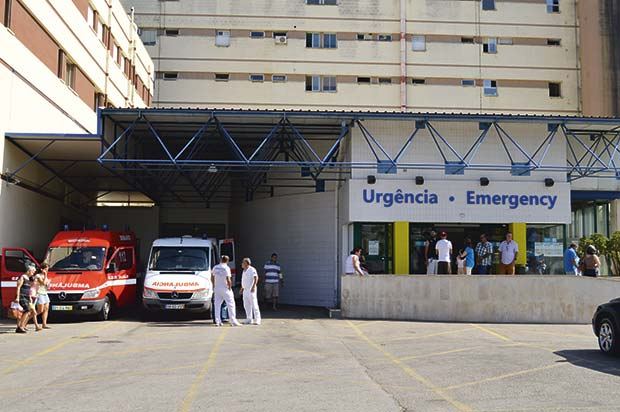 It was a weekend to forget for Faro hospital chiefs following an “anonymous post” – with photographs eerily reminiscent of a warzone deathcamp – that provoked an avalanche of condemnation. The fact that the post was ‘unsigned’, its photographs allegedly ‘not taken this week’ – and myriad other ‘official qualifications’ – cut the government no slack. The worst came on Tuesday when prime minister António Costa admitted Faro hospital’s woes were a microcosm of the state of Portuguese healthcare.

In a heated debate in parliament, he was upbraided over the state of chaos in the country’s casualty departments.

“Health professionals are doing everything, and you are doing nothing,” blasted PSD MP Hugo Soares.

The government’s ‘ally’ Bloco de Esquerda “went further”, said Sol, with leading MP Catarina Martins saying that it was “inexplicable” that the government hadn’t used the €385 million that it had in hand, as a result of the 2017 deficit coming in even further below expectations, to release some of the tension building up in the nation’s hospitals.

Sol’s headline was: “Costa accepts healthcare is in rupture.”

The PM’s actual words were that the SNS state health system has reached “a point of tension that generates elements of rupture”.

“What we are experiencing, we will experience more in the coming years,” he said – very much in the same way that he said last summer that killer forest fires were Portugal’s new reality.

Sol claims Costa was “referring to the lack of investment by the last Executive of Passos Coelho and Paulo Portas” – but this is another of the official lines that very few are taking seriously.

As the original ‘anonymous post’ from the nursing team at the hospital stressed, Faro’s current problems are a “situation that has lasted more than two years (in other words, during the lifetime of this very government), with the knowledge and collusion of the administrative council (the body overseeing the running of the hospital) which has done nothing to resolve in an effective way the deplorable conditions to which patients and health professionals are subjected”.

The alleged Dantesque conditions include patients “suffering authentic torture for days and days, interned on stretchers, sometimes for weeks. Privacy is denied (they are exposed in front of everyone), they have no windows so cannot tell night from day. They are constantly assailed by the stress and noise of a 24/7 casualty department. They are denied the right to secure care and treatment… they are denied the right to eat (many do not eat because there is no one to feed them). Many die alone, surrounded by so many people”.

Within 48-hours of the post being uploaded onto social media, Pandora’s Box had been irreparably plundered. Commentary was coming from every conceivable corner. Even comic actress Maria Vieira became deadly serious: “Of course the nurses had to remain anonymous as the reprisals from this government that stole power would have been immediate in the sense of persecuting, ostracizing and prejudicing all those who denounced the real state of our country,” she wrote. “And no one should think this situation exists only in Faro; no, it is exactly what happens in the crushing majority of public hospitals in Portugal and in the health centres that are full and facing a dramatic scarcity of necessary staff for good functioning, not to mention the overload of working hours these professionals face every day, along with the low salaries they are paid.”

Set against this level of condemnation, the communiqué put out by health chiefs over the weekend almost instantly paled to paper-thin insignificance.

The post is part of “an unjust campaign”, said the statement, suggesting that Facebook is not “a credible source”.

Challenged on Monday to face up to real questions, we were told by the hospital’s press spokesman that the hospital doesn’t give exclusives.

The official statement suggests the hospital board “has been working in a responsible, serious way, in permanent dialogue with all professionals in an attempt to settle and resolve some of the principal well-known constraints”.

That this hasn’t happened is the reason why Faro’s nurses took the bull by the horns last Friday and let rip (click here).

ARS Algarve, the regional health authority, has announced since the controversy that it will be opening up 27 internment beds in the region’s three hospitals “to face up to the affluence of patients”. This is not an announcement prompted by the nurses’ posting, rather a consequence of habitual flu season precautions.

The total number of extra beds available for use will thus grow to 49.

At the same time, the region’s convalescent homes will ready to provide 20 extra beds (10 in Portimão and 10 in Castro Marim) if the need arises.

“This number will extend the capacity of the national network of integrated continuous care” and, at the same time, “relieve the pressure on the Algarve hospital services”, said the hospital.