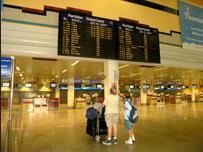 FARO AIRPORT is facing a new era that threatens its position as the sole gateway to the Algarve and that leaves the future looking less certain.

The challenge to its monopoly on air travel comes from a new airport planned for the region.

As a result, the airport authority has pledged to fight for its place in the market and is determined to introduce new methods to encourage and keep passengers coming back to Faro.

The new initiatives follow Lagos and Portimão câmaras’ decision to ask for studies to determine where a new regional airport, which would have a longer runway than Faro, should be located (see The Resident’s edition of January 4 2008).

Although there is still uncertainty, pressure is mounting for a location near to the new Algarve Motor Park at Mexilhoeira Grande.

Adding to the worries of Faro airport are statistics for March 2008, which showed a 0.1 per cent drop in passengers and a 2.4 per cent fall in air traffic compared to the same period last year.

However, it appears that the airport has recognised the need to make improvements.

ANA (Aeroportos de Portugal), which operates the facility, describes its main strategic focus as “striving for sustained growth in operational efficiency” and in the organisation of its business portfolio while developing “new management skills and systems”.

Francisco Pita of the company told The Resident: “Faro Airport has planned a balanced development and management strategy of its infrastructures alongside with the development of marketing and customer service. The airport’s objective is to ensure a high service standard in line with the increasing requirements of airlines and passengers”.

Faro Airport is often criticised for delays at check-in and passport control. Due to the increase in low cost airlines using the airport, the seasonality of the airport has been altered.

“Traffic during the summer months represents about 80 per cent of yearly traffic,” said Francisco Pita, adding that things are changing and that Faro needs to accommodate the reality that tourism in the Algarve continues through the winter and provisions need to be made for customers all year round and not just between April and October.

A recent independent ASQ (Airport Quality Service) survey showed that the most important criteria for the airport to meet is the time spent waiting at check-in queues. It also showed that general satisfaction of the airport by customers had risen from 3.7 out of five to a score of 3.9.

The full report of the ASQ survey is not available to the public but ACI, who run the survey, told The Resident that it is “a business benchmarking tool designed to assist airports” and it is used to help airports improve their services. It is up to airports to choose which results they make public.

But ANA has pledged to “implement appropriate measures to improve the quality of the service provided” as a result of the survey’s findings.