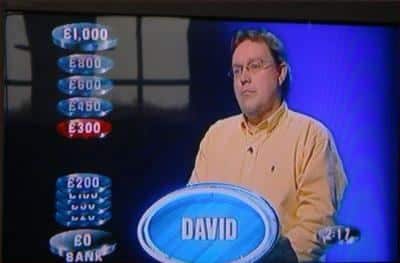 After appearing on numerous UK television game shows, David Lewis has finally settled down in the western Algarve with his family.

Twenty-five years of a stress-filled life working in the City of London led to David answering an advertisement in a London newspaper, the Evening Standard, for contestants for game shows.

What followed were several years of appearing in a number of shows, including The Weakest Link, Brainteaser, Too Many Cooks and various National Lottery shows.

“I found it to be a form of release and I enjoyed it immensely, although my wife ‘lovingly’ referred to it as my ‘mid-life crisis’!” laughs David.

“The whole process, from audition to going on air, was fantastic fun and provided a real insight into the behind-the-scenes world of television broadcasting.”

Despite the best efforts of the indomitable Anne Robinson (who, he says, is a really lovely lady), David came away with more than 2,000 pounds sterling when he appeared on The Weakest Link. “That, despite responding to the question ‘What term for an African Animal is commonly associated with a type of pedestrian crossing?’ with the unbelievably stupid answer, a Belisha Beacon, a comment which was printed on the front page of our local paper the following week!”

This period of his life, which he describes as being ‘great fun’, has given David a host of fascinating stories to tell, which in turn has led to the creation of a book, Fifty Fifty – named because he recently celebrated his 50th birthday as well as from his experiences on these shows.

“Whether it becomes successful or not is irrelevant, but it is a humorous look at the great TV game show, and one man’s attempt to solve the problems caused by his redundancy from his City employer by winning ‘the big one’ on TV,”said David.

After holidaying in the Algarve for years, David was offered a position at Oceânico last year.

He immediately accepted the job and he, his wife Shirley and their two young sons moved to Praia da Luz.

“I am having such a great time. I really love my job and I have such a buzz from my novel,” said David.

He said he and his family are thoroughly enjoying a new way of life, away from the stresses of the City… and the pull of all those enticing game shows!