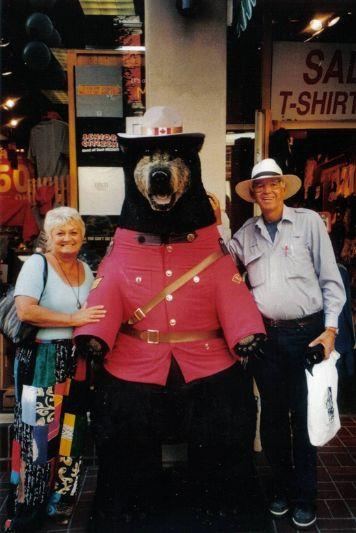 Jenny Grainer arrived in the Algarve to live, work and raise a family in 1968. She is a freelance writer and her book ‘Portugal and the Algarve Now and Then’ has sold more than 2,000 copies

My husband (pictured with me) is a Canadian by birth and a Canadian by nature, initially giving an impression of conservative shyness like many of his countrymen but on a deeper layer, the possessor of a wicked sense of humour and an inbred kindness that makes it difficult for him to turn down anyone in need of a favour.

His generosity of spirit can sometimes be frustrating especially when our wall needs painting but somebody else gets their pictures hung, our terrace looks like a junkyard full of old machines “which might come in handy if someone needs a part to fix an older machine” (said with boyish grin) while the benefactor of said handy part (found after myriad other parts have been dissected) lives in tidy domestic bliss!

Ladies, if you live with one of these angels I’m sure you know the feeling, but don’t you just love ‘em?

Another of his rather more endearing charms is the wonderful contact maintained with the rest of his family in Canada. Having been to his home town of Victoria BC, quite truly one of the most beautiful parts of the country, I find it difficult to understand why he ever left there in the first place – to which he mumbles things like “You’ve never been there in the winter when you have to dig your way out the front door because of the snow.” This is of course very true. My visits have been restricted to June through to September, which are the only months that we ever visit due to the aforementioned reason.

Summers in Canada are long rounds of visiting close-knit family members where all the women are wonderful cooks including Mom who comes from Ukrainian stock and all are softly spoken, incredibly polite people with lovely homes and gardens. Priorities are comfort, eating well, keeping in touch and helping out whenever help is needed. High fashion is a tracksuit and a padded over vest under an even heavier padded overcoat, accessorised with either warm boots or trainers. This is modified to track bottoms and T-shirts on a sunny day and extrovert clothing is left to a few, very few, hippies, in down town Victoria.

Canadians are as unalike Americans as New Zealanders are to Australians, but certainly, at least as far as our family is concerned, extremely kind and giving people, concerned for each others health and no matter how many miles or kilometres apart, they keep in touch.

My mother in law has made no effort to enter the world of the internet and keeps track of her family either by phone or snail mail. At 85 she is extremely sprightly but suffering from the kind of loneliness that the elderly worldwide experience, when their generation of friends,leave to meet their maker and few are left to keep them company. Her letters are written on any spare scrap of paper available, typical of a generation that saved and recycled long before they were told to be green and she always encloses cuttings of local news events, so that her son will always be aware of what’s going on in the town he grew up in.

Typically, in her last letter there was a notice of the death of a close friend, Elodie, who died just one month after her beloved husband. It was a whole column describing the life of this amazing woman. Devoutly religious she was the eldest of six children who had all attended the one room schoolhouse near the grain farm they all lived and worked on. She learned to play piano as a young child and her father had ordered a piano from New York City for her to have at home to play and I guess keep the family entertained; it remains in the family to this day. She was encouraged to go to university, got a degree in Arts and Sciences, won fencing tournaments, entered debates then met husband Charlie who drove a Harley; they had their children and spent a lifetime working in social services.

“She devoted her time to others and had a courage and strength that was inspiring and catchy.”

What a wonderful way to describe someone, “Inspiring and catchy.” How many more who lived through those early hard and difficult years in Canada did Mom number among her friends?

When I got cancer almost two years ago, Mom and Gordon’s brothers were on the phone every week, ever supportive, always listeners, helping me, helping my husband with quiet strength and positive attitudes.

Whatever has happened to all those family values in the UK? Now that the financial picture is looking so grim and everybody is taking stock of their financial priorities, isn’t it time that family priorities were given a firm stock take as well? Are we being as kind and as generous with goodwill and thoughtfulness as we should be? Are we drifting too far away from family ties and the real meaning of  ‘Love thy neighbour?’ Wouldn’t it be something if we could all be described as “Inspiring and Catchy?”

Jenny Grainer can be contacted by emailing features@algarveresident.com