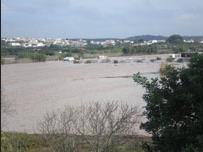 Torrential rain across the region over the past two weeks has flooded numerous homes and damaged several towns. In Vila Real de Santo António alone, at least 10 families were displaced from their homes last Friday.

An emergency action plan came into effect in the area following several telephone calls from citizens about the floods.

The president of the câmara confirmed this to Lusa news agency, adding that they were being temporarily re-homed.

He alerted residents in the area that the danger was not over and heavy rains would continue: “The emergency services will continue on high alert until the atmospheric conditions improve.”

The Meteorological Institute said that these levels of rainfall are normal for this time of year. Matia João Frade of the institute told Lusa that the Algarve was hit by heavy rain, occurring in unstable weather conditions and accompanied by thunderstorms. The thunderstorms were localised phenomena. Frade added that heavy showers regularly occur at this time of year.

The Vila Real de Santo António Câmara was adamant that the amount of rain which fell last Friday was “clearly abnormal”.

All schools were forced to close and traffic in the centre came to a halt as a result of the rain flooding the roads. Schools were also closed in Montegordo, west of Vila Real de Santo António and flooding was registered in towns around the area, including Altura, Castro Marim and Cacela, where the river broke its banks.

At least one house was completely destroyed in Vila Real de Santo António during the torrential rains and strong winds.

There were no reported injuries during the thunderstorms, but there was a good deal of structural damage according to Vaz Pinto, the head of the Centro Distrital de Operação de Socorros de Faro (CDOS), the region’s rescue operation. He said there were 15 teams of bombeiros with 42 men supporting the 50 who were already in Vila Real de Santo António.

The east coast was not the only part of the Algarve to experience flooding. In Silves, the small town of Foz do Ribeiro, near São Bartolomeu de Messines, the rain water managed to leak into houses, a local supermarket and coffee shop and reports were made to the local bombeiros that the water level had reached one metre high.

At least four cars were washed away and, in one case, the driver was still inside the vehicle. The bombeiros managed to perform a safe rescue operation and rescue the driver.

At least 15 calls were made to the bombeiros seeking assistance in the area. Many of the more remote areas of Silves were left without electricity as the rain and wind brought down electricity cables. The Resident contacted the Silves bombeiros, who confirmed that there had been many calls on Sunday (November 5), but by Monday they had subsided.

The Resident spoke to António Rosado, the head of the Albufeira bombeiros, who said: “It is great that it has rained in many ways because hopefully fires during the summer next year will occur less frequently and water supplies should not be an issue.” He also said that the Algarve is not fully equipped to deal with the amount of rain that has fallen recently in terms of drainage and storage.

Dra Fernandes from Águas do Algarve, the company responsible for water storage and supplies in the Algarve, said: “The Algarve will have enough water supplies to last not only until the end of next summer, but until the end of the summer in 2008. We can guarantee this given the amount of rain that has fallen in the past couple of weeks.”