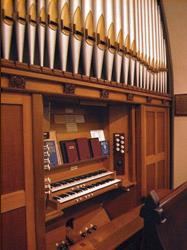 LEAD IS a very dangerous metal. The recent case of the young lad who swallowed a small piece of jewellery and died of lead poisoning is a tragic reminder of how toxic lead can be. It was for this very good reason that tight rules were agreed at EU level, back in 2002, via a special Directive on the Restriction of Hazardous Substances. This lays down that lead will be restricted to 0.1 per cent of any new electrical equipment with effect from July 1 this year. All Member States signed up to this very happily, given their common aim of protecting human health and safeguarding the environment.

But, then some British government bureaucrat discovered that organs were electric, and that organ pipes in churches and cathedrals were made of a 50 per cent lead/tin alloy. He immediately interpreted the Directive as meaning that organs would be banned throughout the EU. I have had numbers of letters of complaint from constituents, from choristers and from congregations, criticising the EU for introducing such a silly law and insisting that if the law cannot be repealed then at least church organs should be exempted from it.

Needless to say, this problem has not been raised in any other EU country. Their great church and cathedral organs have carried on playing as if nothing had happened. And quite rightly so, because nothing has.

A Conservative colleague, Dr Caroline Jackson MEP, was chairman of the European Parliament’s Environment, Public Health and Food Safety Committee when the legislation was initially voted through. Neither she nor the Parliamentary draftsman was approached by anybody with regard to any possible inclusion of church organs being in these Directives. Organs were never even considered.

We followed this up personally with the European Commission a few weeks ago. When our Health spokesman challenged commissioner Wallstrom face to face on this issue, she confidently confirmed that this Directive should not apply to any church organ at all!

To be on the safe side, we have written to Alan Johnson MP, the secretary of state for Trade and Industry, to seek further clarification. In case of any future EU ruling to the contrary, we have urged him to ensure that the UK government formally applies for an exemption so that organ-makers may continue to build and repair traditional pipe organs using traditional lead alloy pipes.

None of this activity should have been necessary if our own civil service had read the Directive properly in the first place. Our Great British bureaucrats are regularly accused of “gold-plating” EU legislation and then blaming Brussels. From now on, they will be accused of lead-plating as well. They should all pipe down, or face the music.