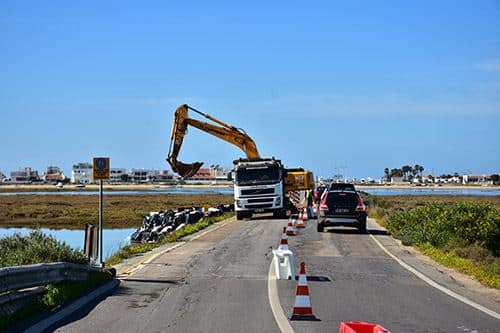 Loulé council has removed the last unused warehouse in the fishermen’s quarter of Quarteira to make way for the construction of a leisure park on the land, which will see the Vilamoura-Quarteira beachfront area become less contrasting and more appealing to residents and tourists alike.

The Bairro dos Pescadores area, considered a ‘black spot’ for tourism in the Algarve for decades, was demolished during the commemorations of the 12th anniversary of Quarteira becoming a city on May 13.

Loulé Câmara has plans to turn the space into a leisure area for residents and tourists alike to enjoy, with green spaces, recreation areas and a new municipal market.

Loulé Mayor Seruca Emídio told the Algarve Resident: “It was an historic day for Quarteira.”

In a symbolic gesture and to demonstrate his commitment into transforming the rundown area into a new attraction, the Mayor manoeuvred the JCB that brought down the last building at Bairro dos Pescadores.

“We’ve been trying to resolve this problem for some time. This was the last building at Bairro dos Pescadores and now the place is clear to construct the new leisure park, which will be an important development for the social and tourist image of the city and also for the region,” said the Mayor.

The park will cover an area of ​​more than 17 hectares and will have, besides the recreation areas, a natural beauty spot with ​​sand dunes, cycle paths and vegetation.

Seruca Emídio said that the work, with the exception of the market, is due to start early next year and expected to be finished by the summer of 2012.

“The most difficult part of the work, which will take more time, will be the shaping of the dunes. But with the commitment and collaboration of the fishermen’s association QUARPESCA, we expect to finish the first phase of the works in time,” he said.

Meanwhile, more developments are under way to improve conditions for residents and tourists in the Loulé council area.

In Pereiras, a new Day Care Centre, which is almost finished, will accommodate 48 children from five months to three years-old.

The €336,700 project was supported by the Social Security Department, the Municipality of Loulé and Pereiras Parish Centre.

The VNC585 road in Pereiras has also been resurfaced in a project which also included the expansion of the water and sewage network in the town. This was an investment of more than €1.2 million.

Meanwhile, Loulé municipality has inaugurated a new water tank that has double the storage capacity of the old one (up to a maximum of 5,000m³).

According to the municipality, this equipment which has cost more than €500,000, will solve the problems previous during the peak of the summer time.

In Vilamoura, the marina avenue has recently undergone improvement works to ensure the safety of tourists and local residents.