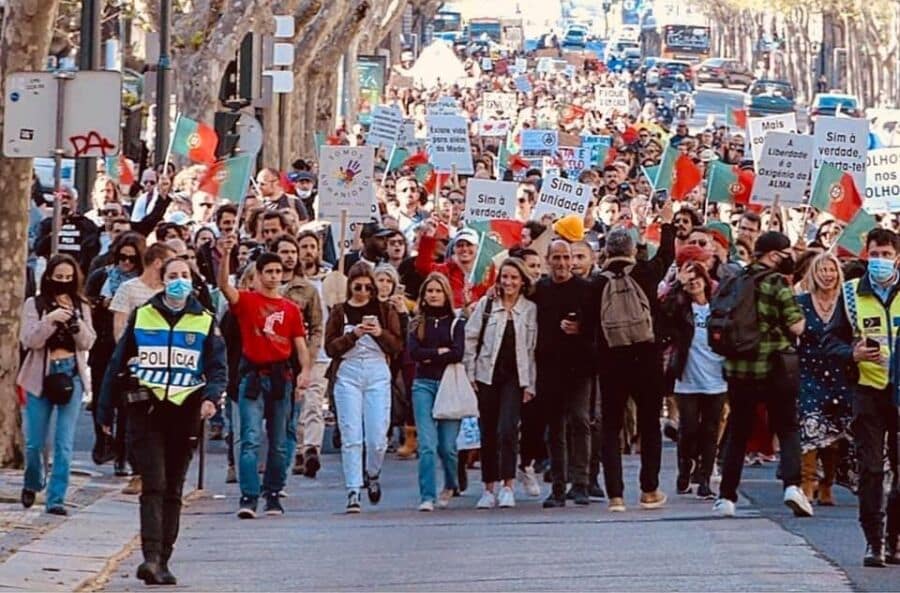 The 2020 RASI (Report on Internal Security) has highlighted how dangerous it has suddenly become to interpret real situations from Portuguese headlines.

Yesterday we had the message from interior minister Eduardo Cabrita that “figures for crime in 2020″ had sunk to historic lows”.

It took a little more study of RASI to realise that actually murders were up (there were 93 more in 2020 than in 2019), there had been more break-ins at pharmacies and fuel stations, more assaults on Post Offices and armoured cash-in-transit vans, more raids on commercial and industrial centres, more household robberies and more crimes of extortion.

Yes, certain crimes were down (particularly for the period of lockdown/ State of Emergency), but to bubblewrap the truth with descriptions like ‘historic lows’ was a tad expedient.

Today, Diário de Notícias carries the headline that “the extreme right and pandemic negationists are getting closer”

SIS, Portugal’s secret services, has flagged the growth of “inorganic social movements online” which it has dubbed ‘pandemic negationists’. These carry ‘risks of violent radicalisation of young Portuguese worsening in the coming years’, says SIS.

RASI then makes an enormous ‘leap’ – which the Portuguese media appears simply to have ‘taken on board’ without question: confinement has “increased the exposure time of society in general – and of young people in particular – to online media and opened a range of opportunities for radical movements of the extreme right to disseminate propaganda content and digital disinformation with a view to increasing their support bases, galvanizing anti-system sentiments and reinforcing radicalisation with a xenophobic basis, resorting to the appealing discourse of violence and hatred at a time when Portuguese society is also confronted with the phenomena of ideological polarisation”.

In other words, the extreme right and ‘pandemic negationists’ are not ‘getting closer’ in any ideological or even meaningful sense. SIS simply sees that they both exist, so seems to conveniently lump them into the same bag of ‘undesirables’… and today’s report in Diário de Notícias has ‘gone along with the strategy’, not showing in any one sentence where exactly these two different factions actually do meet ar all, or even ‘get closer’ (other than that they both exist and post material online).

The situation hasn’t been ‘challenged’ in any way. Tomorrow it will be ‘yesterday’s news’. But for people who seriously do question the pandemic mantra daily appearing in the press, this one news item has been ‘too much!’

Said a member of a little-known group in the west Algarve dubbed ABC (with followers in Lagos and Aljezur) it’s further indication that “people who don’t support the mainstream narrative are being labelled far-right, uneducated idiots…There are a lot of  people questioning everything these days, like myself, who don’t fit that description at all”, she told us.

“Interesting, too, is the fact that Portuguese newspapers/ media in general never actually give a platform to people with contrary views without trying to make them seem insane or ridiculous… I don’t see anyone quoted in this article with a differing opinion.”

That much certainly is true – but worse perhaps is the tenuous link the article has used as a headline without showing where exactly it is that the extreme right and those who question the pandemic are indeed ‘getting closer’.