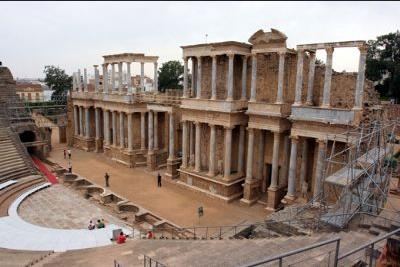 ‘Travel’ is written by freelance journalist and photographer, Chris Graeme, who lives in Lisbon and   enjoys subjects such as world economics and politics.

Just across the border from the Upper Alentejo are two of Spain’s most precious historical and archaeological jewels that are worth making a day trip to.

Cáceres, a World Heritage City site, and one of the contending cities for Capital of European Culture in 2012, has one of the best preserved medieval and renaissance quarters to be seen anywhere in Europe.

Exploring the old town with its narrow winding cobbled streets and imposing light stone fortified buildings, palaces and impressive churches can be done at a leisurely pace taking around two hours.

Cacéres offers a valuable insight into two periods of Iberian history, not only because it is a bustling provincial capital of the Extremadura region but also because it is where, historically, two cultures collide – the Moorish culture of the 15th and 14th centuries and the late medieval culture of a newly united Spain under the Catholic kings of Ferdinand of Aragon and Isabella of Castille in the late 15th century.

The city has a profusion of well-preserved and maintained palaces and ducal houses littered with impressive coats of arms, many with fortified towers which give it an air of some of those towns to be found in northern Italy.

What is immediately noticeable during June and July is the profusion of storks’ nests which seem to be precariously perched atop each tower and every available roof and ledge. Indeed the storks, which winter in Africa and return to this part of the Iberian Peninsula to breed in the spring, are somewhat of a mascot for this imposing city and soft toy storks of various sizes are to be bought in nearly every souvenir shop and newsagents within the city centre.

To best see the famous storks, it is worth climbing the Torre de Las Cigueñas (Storks Tower), which was built at the end of the 15th century and from where you can take marvellous close-ups of these birds guarding their nests.

Amazingly, the blend of architectural styles, which range from Arabesque to high gothic, Roman, Italian renaissance to the later styles influenced by Spain’s conquest of the Americas, seems to work particularly well.

Saturdays sees the historic town centre filled with crowds of colourful, well-dressed women sporting fans on the way to one of the many weddings that take place in the local churches and cathedral, and the happy brides are more than obliging to pose for a photograph for a curious tourist.

Among the most interesting buildings of note are the Los Sandes Tower and the Golfines Palace where both the Catholic kings stayed when in the region, and from which they organised the governance of the city and region as a whole. Just 50 kilometres or so further down the road is one of the best preserved Roman cities anywhere to be found within the former Roman Empire – Emerita Augusta.

A world heritage site, Mérida, as it is called today, has the best preserved Roman ruins on the Iberian Peninsula, including a dramatic and imposing theatre, which is still used for evening floodlit plays and opera performances today, as well as superbly preserved Roman villas, catacombs, an entire amphitheatre, a circus maximus, one of the best Roman bridges in the world, the remains of an aqueduct and a triumphal arch dating from the time of the Emperor Trajan.

A ticket to tour the extensive site, which will take at least two hours, costs 12 euros and includes entry into the Roman Archaeological Museum just outside the site of the Roman city around which has been landscaped some wonderful botanical gardens.

The museum contains many of the finds unearthed over the past century at Mérida including impressive marble statues and busts, bronzes, gold and silver coins, glassware, copper pans and cooking utensils, hairpins and combs, silver ‘collection’ salvers, and wonderfully preserved mosaics and wall paintings from the remains of Roman villas that have been incorporated into the museum.

In Cáceres, there are a plethora of esplanade cafés and restaurants in the main square at the entrance to the old city where lunch and a refreshing jug of sangria is to be had, while in Mérida, opposite the museum, are excellent ice-cream parlours, cafés serving smoked sausages and hams and lots of shoe and leather goods shops in the main square.