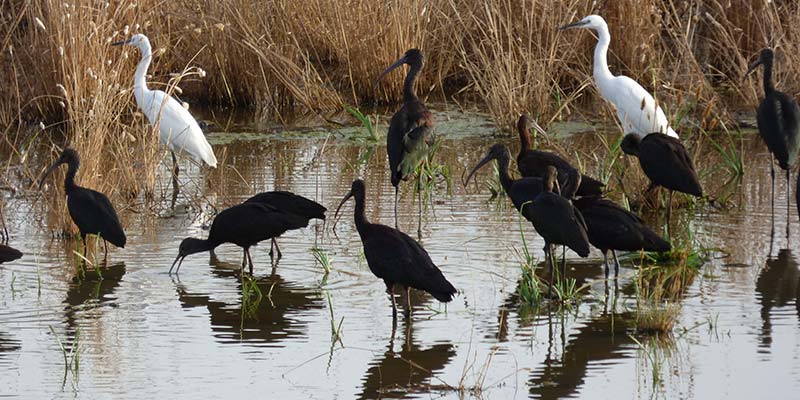 A 97-page report published online today – and up for discussion on Thursday in Faro – has hammered what could be the final nail in intentions of Lagoa Council to press forwards with ‘obsolete plans’ to ‘urbanise’ the town’s signature wetland, Alagoas Brancas.

Only last week, deputy mayor Luís Encarnação was telling national television that the council “has no document that allows it to make a decision to suspend the town’s 11-year-old urbanisation plan” (click here).

But this latest document not only fills such a requirement in scientific spades, it warns of the potentially catastrophic consequences of not suspending the plan.

Says the study – financed from the government’s environmental fund – any kind of building on the freshwater lagoon site could lead to the area collapsing and the contamination of aquifers (underground waterways that supply local farms and domestic boreholes).

Compiled by technicians from SPEA and researchers at the universities of the Algarve and Lisbon, the report explains “there is a real threat to the stability of this zone as it is a karstic area with active tectonics which could collapse due to excess surface load”.

In simple terms, this means the area sits on the kind of rock formations that absorb water and form underground caverns and sinkholes.

Active tectonics imply the risk of earth-movement in the event of tremors (which the Algarve gets on a regular basis).

More to the point, the study stresses the importance not only of saving the lagoon and its wealth of flora and fauna, but of recuperating it – as campaigners have been saying for months – in the interests of future generations.

Says the text: “In view of the uniqueness of the species present in the area, the creation of a statute of protection is essential”.

The detailed analysis is to be presented by Almargem at the CCDR headquarters in Faro in two days time, along with similar studies into the Algarve’s other wetland sites: Silves’ Lagoa dos Salgados and Foz de Alcantarilha and Loulé’s Foz do Almargem e Trafal.

The event, starting at 10.30am, is open to the public and sets out to present solutions so that the areas and their extraordinary plant and animal life can be enjoyed by everyone, not simply by local communities and birdlovers.

Representatives from the various municipalities have been invited to take part but at time of writing it still appears that Lagoa council has failed to confirm its presence.

Repeated calls to the council have been unable to find anyone prepared to discuss the Alagoas Brancas ‘impasse’ – which still sees the official municipal line being that construction for supermarket infrastructures ‘cannot be stopped’.

We have been told deputy mayor Luís Encarnação is the man to talk to, while mayor Francisco Martins is “due to have a meeting with Almargem” to discuss the report – but, again, no dates have been given.

What is certain is that the document will make it much more difficult now for the council to ‘carry on regardless’ and uphold an urban plan that has been so vociferously trashed by so many save ‘the interested parties’ (cited by various reports online as supermarket chain Sonae).