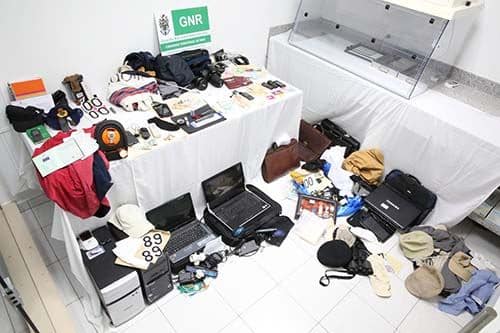 An unlikely criminal gang of five old men was finally brought to justice after robbing businessmen up and down the country of as much as a million euros.
The modus operandi of the group – dubbed by police as the “beret brigade” (Gangue da Bóina) – was ingenious.
They would stake out their victims as these went to make withdrawals from banks.
Because the men were all in their 60s and 70s and wearing typical old men-type hats, no-one apparently even noticed them. Thus, they were safe to study victims’ comings and goings.
A 10-month long investigation led by Faro GNR in collaboration with commands in Lisbon and Setúbal, tracked the gang as it swooped on luckless businessmen in Aveiro, Leiria, Porto and Braga, as well as in the capital and in the Algarve.
“They worked the whole country,” Lt-Col Joaquim Vivas told journalists. “They focused on areas with a lot of industry and construction.”
In fact, Vivas revealed that police doubt whether they know yet of all the gang’s crimes.
The group was finally brought to ground in Gondomar, where they were reported to be plotting a new wave of attacks.
All resident in the Lisbon-Setúbal area, searches of the men’s homes netted cash, cars, large quantities of electronic equipment … and a stash of woolly hats and berets.
The five are all due to be heard in court in Faro this week.