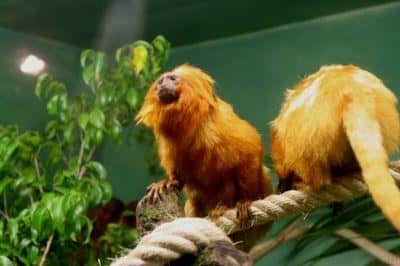 Probably no scientific figure of the last 200 years proved as utterly controversial as the naturalist Charles Darwin.

The scientist’s explosive bestselling book of 1859, The Origin of the Species, split Victorian society into two, questioning the Bible and church teachings that ‘God created the World in seven days’ and sending shock waves around the Western world.

A groundbreaking exhibition into the life, impact and contemporaries of Charles Darwin was opened at the Gulbenkian Museum in Lisbon earlier this month by President Cavaco Silva and First Lady Maria Cavaco Silva.

The Evolution of Darwin is an exhibition about the history of evolutionary debate from the 17th century, when the idea was first mooted, up until the present day. It also coincides with the bi-centenary of his birth.

Spread over eight halls, the exhibition boasts many original letters, documents, first editions of the book itself, a myriad of stuffed animals and a small but colourful collection of exotic live animals courtesy of Lisbon Zoo.

The exhibition, which also includes a model of The Beagle, the ship that took Darwin on his travels along the coast of South America, recreates the trip and shows how Charles Darwin arrived at his ‘Theory of Evolution through Natural Selection’ and convinced the entire world that all species evolved from a common ancestor.

Darwin was only 22 year old when he began his five-year journey around the world on The Beagle, without which he never would have formed his theory of evolution. It was in the Galapagos Islands that Darwin collected data and examples showing how animals adapted over time to their environment.

What: The Evolution of Darwin

Where: The Gulbenkian, Avenida Berna 45A, Lisbon