Portugal Resident
Home Original Everything you should know about Californian wine 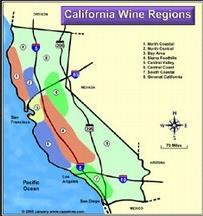 WHEN WE think of California, we think of wine. Well, wine drinkers do. So does California make good wines? Yes. All wine producing countries produce four types of wine: great, good, fair and undrinkable. In fairness, their production of great and good exceeds the other two by millions of gallons.

Although wine is produced in about 45 of the US States, California is the flagship. Their 250 years of winemaking was interrupted by the War of Independence, the Civil War and the Great Depression. The vines were also attacked by the rootlouse, (phylloxera) in the 1980s, but the worst disaster of all was ‘Prohibition’ (1919-1933), when Americans were prohibited from making alcoholic drinks, except sacramental wines for the churches and home winemaking. It wasn’t until the GIs returned after World War II that the Americans started to appreciate drinking wine with their meals. Before that, they drank whiskey.

If you’re buying Californian wine, here are a few things you should know. The state covers about 411,000 square kilometres (nearly twice the size of the UK) and there are almost 135,000 hectares of vineyards, stretching from Mendocino County in the north, down to San Diego near the Mexican border. Within that area, there are many different climatic conditions and soils that affect wine production. So, a Cabernet Sauvignon from El Dorado will be quite different to one from San Diego.

The state of California is an appellation and if a producer wants California on his label, then all the grapes have to be grown within its borders. The next appellation is the county, for example, Sonoma, Mendocino. Only 75 per cent of the grapes used have to be grown in the county, the rest can be grown anywhere else in California. This means your Napa Valley wine might have grapes in it from Trinity County or Lake County.

We then have American Viticultural Areas (AVAs), which differ from other areas by geographical features like climate, soil and elevation. These three features apply all over the state and in the Napa Valley alone you’ve got 10 different soils and five microclimatic zones. So why classify them? I think Bureau of Alcohol, Tobacco and Firearms (BATF), who are responsible for wine production all over the US, would be better off getting rid of the AVAs and insist that all grapes used in a wine should be grown in the wine’s county of origin.

Most American wines are varietal wines, which means the wine is named after the predominant grape in it. Some counties have to have at least 75 per cent of the named grape, while others need 86 per cent. Don’t worry about the remaining grapes, as no winemaker is going to use some inferior grape and ruin the wine, as well as his/her reputation.

You will be familiar with grape names Cab. Sauv., Merlot, Shiraz (Syrah), Sauv. Blanc, Chardonnay, Semillon, and so on, as they are all French. They have their own Zinfandel, a black grape from which they make a Zinfandel White, but looks like a weak Rosé. There’s nothing wrong with the wine, but why call it white? Maybe the winemaker left the wine in contact with the black skins too long, allowing it to take on some of the pigment, but having ordered thousands of the Zinfandel White labels, they had no choice but to use them! (Then again, maybe not) I seem to remember they used to call a Rosé “Blush”. I wonder why they changed?

One little concern is the number of additives they are allowed to use. I think there are over 40 of them, water and colouring included. Yet, they won’t allow chaptalisation, which is adding sugar before or during fermentation in order to increase the alcohol content of the finished wine. I realise California has a temperate climate, but it must be very difficult in some years to achieve the minimum alcohol content without chaptalisation. They must be the only country in the world that does not allow it.

I saw an article in an English magazine entitled Viva Italia. The writer was Matthew Jukes and he reviewed nine Italian wines. He said: “There are no cheapies here, just the very best Italian wines that are stocked in the UK.” There’s nothing wrong with the wines, but I know that Brunello, Amarone, Barolo and Est-Est are also available all over the UK. How anyone can write about the best Italian wines in the UK and not mention them, it beggars belief. I suppose we’re lucky he mentioned Vino Nobile di Montepulciano. Another worrying thing is that he and other writers always mention a few specific outlets where the wines are available. I wonder why?

Julie Wheldon, science correspondent, wrote an article in which she said: “The recipe for the perfect cheese and wine party was revealed yesterday,” ‘yesterday’ being January 19, 2006. If she’d said 1906 she’d have been nearer the truth. Why do scientists spend so much time and money telling us things we’ve known for many, many years? What planet are they on?

My next article will be entitled ‘Cheese and wine’.