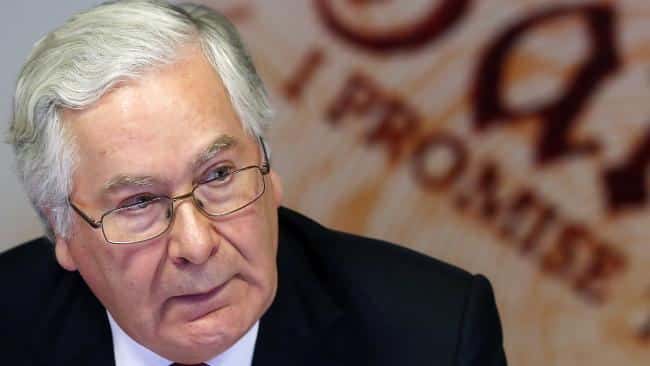 Lord King, the former governor of the Bank of England, has just presented a new book (The End of Alchemy: Money, Banking and the Future of the Global Economy) where he sets out all the reasons why, in his view, the eurozone is on a hiding to nothing.

Widely discussed in financial media, his thoughts have been covered in Portugal by Expresso which gives excerpts from the book that essentially is about King’s “economic ideas”.

“The monetary union generated a conflict between a centralised elite on one side and the forces of national democracy on the other,” Expresso translates. “This is extraordinarily dangerous,” says King, who predicts that peripheral countries in the euro will end up tiring of the sacrifices that have to be made to remain in the euro.”

“The counter-argument – that leaving the euro would provoke the collapse of life patterns and provoke uncertainty over the survival of the monetary union – has real weight,” King is quoted as writing, and this will prompt what he calls “fatigue”.

But “if the alternative is an austerity that smothers, the continuation of mass unemployment and the absence of an end in sight from debt, then leaving the euro could be the only way to return to growth and full employment. The long term benefits overcome the short term costs (of leaving)”.

Critics are agreed it is an “exceptionally thought-provoking book” but “not one that gives any reason to hope the dam of delusion and obstinacy is about to be breached” (Independent).

As Expresso explains: “The problem stems with Germany. The attempt to find a middle ground is not working. One day Germany voters could rebel against all the losses imposed on them to prop up their weaker brothers and, without doubt, the easiest way to divide the eurozone would be if Germany left it.”

The Independent’s critique explains that Lord King “often hinted” at the many ideas floated in his book, but he “never spelled them out – or linked them together. Many were, alas, too contentious. But now he’s free to shout them from the rooftops. It will be fascinating to hear what gets shouted back”.

As the Mirror Group’s new newspaper the New Day reports: “King is not a rogue economist. He was the man who helped UK prime minister Gordon Brown stitch together the plan said to have ‘saved the world’ during the financial crisis in 2008.”