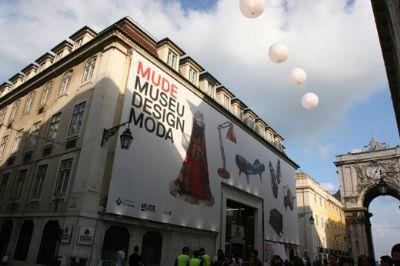 After the international success of the Berardo Collection – Museum of Contemporary Art and the Oriental Art Museum, Lisbon now has a third world-class museum.

The 6.6 million euro collection, which contains around 2,500 pieces of art, fashion and design from the 1920s to the present day, partly occupies the 1,200 square metre ground floor of the gutted and revamped former Banco Nacional Ultramarino in Lisbon’s Baixa district, on Rua Augusta.

The rough and un-fashioned concrete ceiling of the building has been deliberately left unpainted so as to “create a stark contrast between the 100 or so principal objects currently on display and their surroundings,” MUDE Museum Director Bárbara Coutinho told the Algarve Resident on the opening night.

Considered one of the finest collections of contemporary iconic fashion art and design anywhere in Europe, the ground floor contains only a fraction of the entire collection which will eventually extend to the upper floors of the building.

Stunning creations by fashion designers such as Christian Dior, Yohji Yamamoto, Walter van Beirendonck, Jean-Paul Gaultier and Madame Alix Grès (1899-1993) colourfully stand out against a backdrop of black and white projected moving film images of icons such as Coco Chanel.

Also on display are at-the-time cutting edge examples of design for chairs and sofas by Irving Harper (1956) and George Nelson (1955), tables, sofas, lamps and electronic goods such as a 1938 Zenith bakelite radio, 1950s fans and 1960s plastic record players.

One can only marvel at those fabulously kitschy 1970s silver platform-heeled moon boots  – the type sported by Elton John and co, or the kooky white 1960s patent leather boots by André Courrèges (1965) seen in early Top of the Pops videos and worn by iconic stars from Dusty Springfield and Diana Rigg to Twiggy and Lulu.

References to the British invasion and revolution in design and fashion are almost everywhere you look – a display of Beatles memorabilia is juxtaposed by a daring and outlandish butterfly 60s creation by the Queen of Punk Zandra Rhodes.

The President of Lisbon Câmara, António Costa, told the Algarve Resident that the museum was a welcome “vitamin shot in the arm” for the city which would only add to the city’s current international portfolio of world-class art galleries, museums and attractions.

What: MUDE – Museum of Fashion and Design