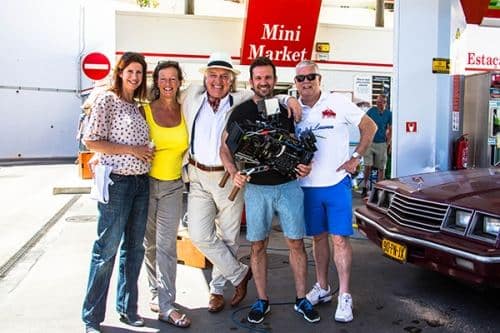 …and the Algarve sets the bar high

Europe’s leading tourism and travel entities were rewarded for their high standards and impeccable services on Saturday night (October 6) at the new Conrad Algarve resort in Quinta do Lago, where the best of the best received trophies of top honour.

A gala ceremony hosted by the World Travel Awards (WTA), attended by the Algarve Resident, saw the gathering of senior tourism figures and VIPs from 35 different nations who enjoyed an evening of success and triumph.

The WTA awards programme, hailed as the ‘Oscars of the travel industry’ worldwide, highlights and rewards those travel brands that have made the greatest contribution to the industry over the past year and votes were submitted by professionals working within the travel and tourism sector since January.

Opening the ceremony, Vice-President of the WTA, Chris Frost, speaking on behalf of WTA President and founder Graham E. Cooke, greeted distinguished guests and underlined the depth and quality of the travel and tourism sector across Europe.

“This ceremony serves as a fitting spotlight for the Algarve, reflecting the vital role of tourism in the region and its overall contribution to the Portuguese economy. The Algarve is also one of the most beautiful stretches of coastline in the world and the new Conrad Algarve has set a new precedent for luxury,” he said. “During times of economic austerity world-class brands come into their own and the winners at our Europe Ceremony represent the cream of the continent. These organisations will undoubtedly fare strongly in our Grand Final, which takes place in New Delhi, India on December 12, 2012,” he concluded, congratulating all of the winners.

Racking up a total of 12 overall awards, Portugal as a touristic destination and the Algarve in particular set the standards high for other European nominees.

He said to the audience: “It is with enormous pride that the Algarve is hosting such a prestigious event as the WTA. This is a unique opportunity to promote the region as a first-class destination, with exceptional facilities and an enviable climate like no other country in Europe. We are delighted and grateful to the organisation to have chosen the Algarve for such a memorable event.”

Lisbon’s Bairro Alto Hotel was the first entity to receive an award from the evening’s presenter, Ela Clark, for being Portugal’s leading boutique hotel, followed by the Dunas Douradas Beach Club in Almancil, as Europe’s leading villa and apartment resort.

She said: “To receive another award of such prestige, voted by travel professionals from all over the world, is indeed a unique achievement and goes to show that perseverance and meeting our clients’ needs are primordial to success”.

Meanwhile, the Hilton Vilamoura was deemed as Portugal’s leading hotel, while Vila Joya in Albufeira was congratulated for the 13th consecutive year as Europe’s leading boutique hotel.

Winning the award for Europe’s leading villa resort was Martinhal Beach Resort and Hotel, Sagres. The owners, Chitra and Roman Stern, said: “This award positions us as one of the top European hotel products. Martinhal has been designed with families in mind and combines stylish design, understated luxury, child-friendliness and genuine hospitality.”

Joachim Hartl, General Manager of the Conrad Algarve, who accepted the award said: “Congratulations to all who were successful this evening. As the latest luxury hotel to open in the Algarve, we are proud to host Europe’s tourism elite during the awards and to showcase our exquisite property. By focussing on the individual, Conrad Algarve offers guests style and exceptional service in the alluring Algarve region of Portugal which is a must-visit destination for those seeking a sophisticated, modern retreat.” Additional awards brought in for the Algarve saw the Blue & Green Vilalara Thalassa Resort in Porches congratulated as Portugal’s leading spa resort, while the country’s leading conference hotel and leading resort awards were handed out to the Ria Part Hotel & Spa in Almancil and the Le Méridien Penina Golf & Resort.

Among those travel luminaries present at the WTA were companies worthy of titles including Europe’s leading new luxury hotel awarded to Turkey’s Angel Peninsula Hotel, and Europe’s leading charter airline and low-cost airline awards, which were presented to Sky Airlines and to easyJet.

Additional awards include Europe’s leading travel agency and cruise travel agent, given to Thompson and Cruise.co.uk. Europe’s leading design hotel and couples resort both went to the Adam & Eve Hotel of Turkey, plus many more awards presented to entities under a wide range of touristic related categories.

WTA’s Europe Ceremony 2012 marked the third leg of WTA’s Grand Tour, a global search for the world’s leading travel brands, which also includes regional heats in Dubai, Singapore, Turks and Caicos. The winners of these legs will then go head-to-head at WTA’s Grand Final, which takes place at The Oberoi, Gurgaon, New Delhi, India on December 12, 2012.