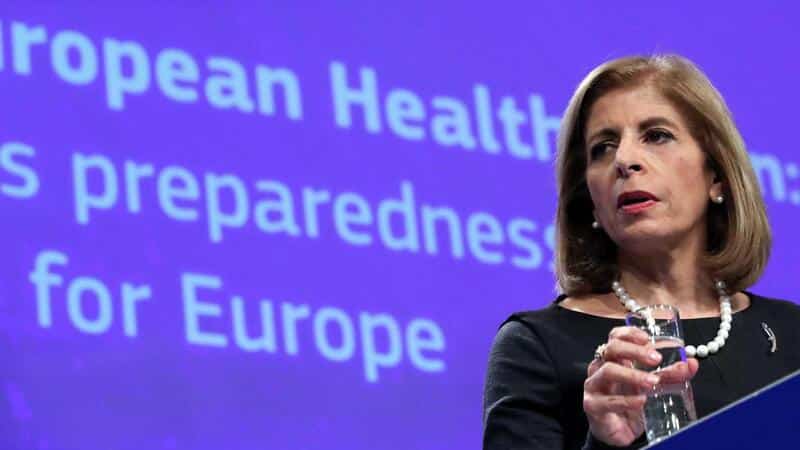 European health commissioner Stella Kyriakides is in the Portuguese tabloid press today, lamenting what she calls “the pandemic of the unvaccinated”.

It is a direct lift from a similar phrase used by US president Joe Biden shortly after he came to power this year. But is it true?

In making a case for health workers to be authorised for 3rd booster jabs ‘now’ – not later in the winter – he told SIC television news yesterday that “a significant number of cases” appearing right now are in people who have been fully-vaccinated.

It is also “beginning to be noticed” that of patients admitted to hospital with Covid-19 who go into intensive care “a not so significant percentage, but considerable, are also people who have already been vaccinated”.

As Mr Guimarães reiterated – a point that so many in the health sector seem to circumnavigate – “vaccines have a time-span. They need to be reinforced” which is why he maintains it is “fundamental” that healthcare workers are all offered booster shots ahead of the winter.

“We understand now that a third dose will be necessary. There are recent studies that demonstrate that after a determined period of time there is a break in protection”.

That ‘determined period of time’ starts “around six, seven months after inoculation”, he told SIC.

In other words, healthcare workers who received their shots in December and January this year could all be vulnerable to this break in protection already. In fact, they almost certainly are vulnerable, hence Mr Guimarães’ concern.

“Emergency departments are going to be completely overwhelmed with the flu” this winter, he stressed – along with patients with chronic illnesses who haven’t been properly monitored through the pandemic and are now suffering issues and resorting to A&E departments “sometimes with potentially serious situations”.

Some health authorities are considering suspending staff holidays over Christmas and New Year – yet these people are already ‘exhausted’.

Not to have thought to see them ‘fully protected’ from Covid in this context is, in Mr Guimarães opinion, “a mistake” (as this text went up online, news came through that healthcare and social workers are now to be authorised for 3rd booster jabs).

But for the message still to be allowed that infections are somehow the fault of the tiny percentage of the population that is not vaccinated (the overwhelming majority being children under the age of 12) is bizarre.

On Monday, the UK Telegraph carried an upbeat story (from Portugal’s point of view) over the forecast for this winter from the director of disease surveillance at the ECDC (European Centre of Disease Control click here).

He too believes that it is the unvaccinated who are powering “the three distinct epidemiological trends” emerging across Europe.

In countries where there is a higher percentage of unvaccinated than found in Portugal, the virus is still calling the shots – transmission has not sufficiently reduced.

“The more unvaccinated people are infected, the more vaccine breakthroughs there will be, and the bigger the impact on the vaccinated,” Dr Bruno Ciancio told the Telegraph.

But incidence here is still rising in spite of the extraordinary proportion of people inoculated. The daily DGS bulletins have plotted the risk matrix for days now relentlessly leaving the ‘safe’ green box to which it returned during the height of the vaccination campaign and approaching the orange area that merges with red.

Nothing is clear – and we are only at the beginning of November: a long way from winter and all its traditional complications and demands on the health service.

Today (November 3), the number of new infections in Portugal has hit over 1,000 for the first time in weeks. Transmission is up to 104.4 cases per 100,000; hospital admissions have risen again, as have numbers in intensive care.

And no-one here is blaming the unvaccinated – very possibly because as Mr Guimarães seems to have pointed out, it is simply not that cut and dried.