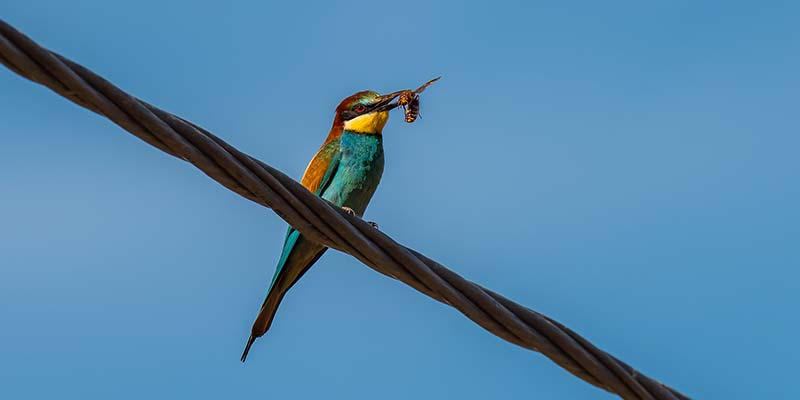 We became residents in Portugal in August 2016, so as my passion is photography, imagine my delight when the following April a colony of European bee-eaters began nesting in the garden!

You often hear bee-eaters (known as “abelharuco” in Portuguese) long before you see them. They are very vocal and have a distinct, almost electronic, sound. They are usually seen in groups of 20 to 30 birds and rarely seen alone. In the bright sunlight, it’s sometimes easy to miss their bright plumage of blues, reds and yellows, however, once you spot one, they are unmistakable.

This year, they are very late. It is usual to see their return from Africa in late March, early April. However, I suspect the very wet and windy conditions have delayed their return journey. Locally in the northern hills, I have seen colonies pass through to their nest sites during the last week. As I type this article, the colony local to the house have arrived today, more than two weeks late.

As their name suggests, they eat bees, but also wasps, hornets and dragonflies. They have an incredible skill of hitting the insect against a hard surface to knock the sting out before eating. It is a common sight to see them perched on electric cables with a catch.

Studies show that they eat 250 bees daily, however, after observing these birds last year, I find it difficult to believe this fact. It would equate to a catch every couple of minutes. Here in the hills of the Algarve, there is a plentiful supply of honey bees and the effect on the bee population is very small.

Breeding pairs are usually monogamous. Nests are tunnels of around one metre long dug into vertical banks with a chamber at the end. New tunnels are built every year and are usually always near a water source.

The males are very romantic. During courtship, you will see the pair sitting together with the male offering the larger catches to the females and eating the smaller ones himself. In June, a clutch of 6-7 eggs are laid and both male and female take turns to care for the eggs. As a colony, feeding tasks can be assisted by non-parental bee-eaters.

Males and females are very similar, with the male having slightly more brown colouring on their wing shoulders.

Photographing bee-eaters can be easily achieved when they are perched on electricity cables, however, I would recommend shooting from a distance with a long lens as approaching them can cause them to fly.

I have had success in sitting in an area and waiting for them to perch nearby. To photograph them in-flight, get out early or wait until later in the evening when the sun is lower as photography in the midday sun usually results in a silhouette, masking their colour.

They can be found in many areas of the Algarve. Look for old and new nest holes; however, heading into the Algarve hills, where the rivers flow, is an ideal place to look.

I host monthly free nature photography walks where you may be able to view and photograph these beautiful birds (information and registration is available on my website). 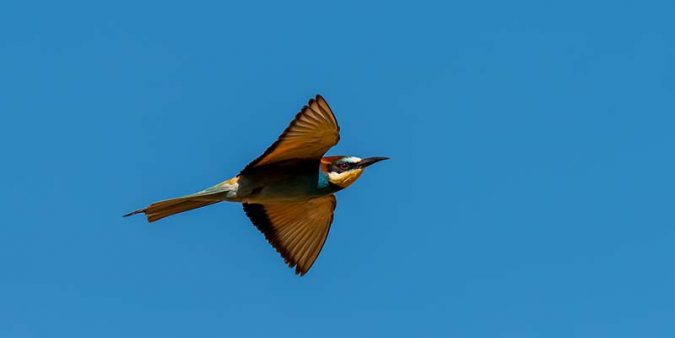 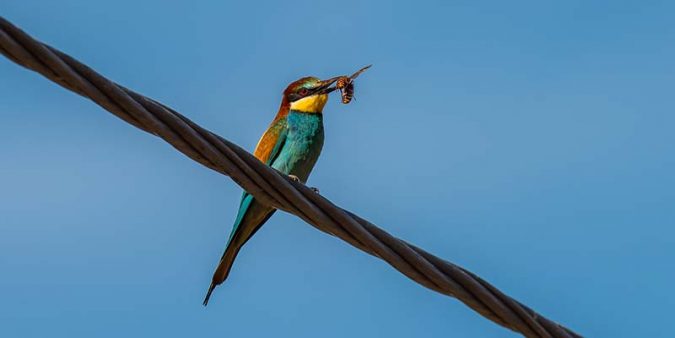