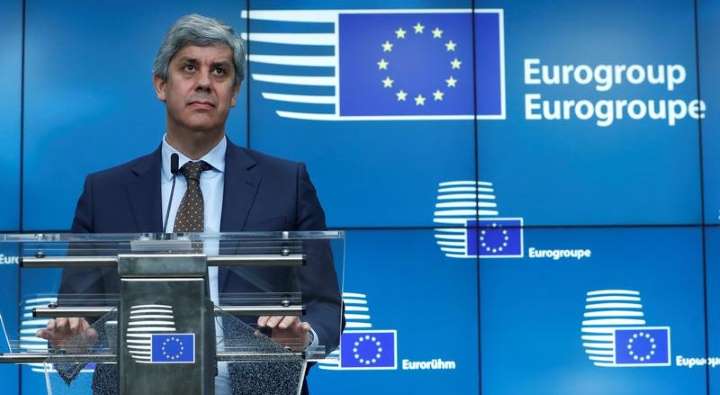 European finance ministers completed a marathon of talks last night with an ‘unprecedented agreement’ to release 540 billion euros “immediately” to help limit the impact of the coronavirus pandemic on the bloc’s economy.

No sooner had the news gone out than Portuguese prime minister António Costa was pushing for ‘the next step’. Because, no matter the ‘brave words and Tweeted salutations, there is still some way to go before this money will start coming through.

Explain reports, the Eurogroup has left decisions on how the money is shared out to heads of government and the State of the European Union. And within this group, there are differing opinions on ‘the best way forwards’.

As Eurogroup president (and Portuguese finance minister) Mário Centeno acknowledged, some member states want the funds created to be “supported by the emission of joint debt (so-called eurobonds or in this case coronabonds), others defend alternatives”. “Something new” has to be found, and found fast.

In other words in many ways we are no further forwards than we were two weeks ago, when the European summit bounced decision-making over to the Eurogroup.

There may now be a ‘package’ but no-one is clear on how to dish it out.

Hence Mr Costa’s insistence that European leaders need to get together “as quickly as possible”.

So what exactly was agreed last night? Online ‘Think.ing’ has explained the pact and its context in layman’s terms:

“Up to now, national governments have announced their own national rescue packages, differing in size but almost all following similar patterns: guarantees, liquidity support, short-time work schemes and cash-out fiscal stimulus. A waiver for the fiscal rules had been agreed, state aid rules were relaxed and the European Central Bank (ECB) announced its PEPP programme. Today, European finance ministers added the following to the list:

“European Stability Mechanism (ESM) – The biggest step taken has been the (almost) unconditional use of the ESM for 240 billion euros, which is about 2% of eurozone GDP. ESM loans are normally only to be withdrawn with the conditionality of a reform program, but to fight the direct and indirect health care, cure and prevention costs of the corona crisis this conditionality has been waived. To those who think that this is money will not be used: the definition of Corona-related costs is broad enough. This will go much beyond pure health care costs. If countries want to use the bailout fund for economic support, the ESM will be available with conditions, but the question is what exactly counts as costs related to health care. Eurogroup president Centeno mentioned during the press conference that he expects that all countries should be able to identify health care costs for 2% of their GDP, which sounds like this can be interpreted in a broad manner.

“Labour market support – the Eurogroup has endorsed the new European Commission initiative to support national short-time work schemes called SURE. The support comes through loans at favourable rates, for which 100 billion euro will be available EU-wide. As most countries have such schemes implemented or promised to do so already, the eligibility is broad-based among eurozone member states.

“European Investment Bank (EIB) guarantees – These will be used to guarantee 200 billion for the loan guarantees that the individual countries have committed to.

“Alongside these three safety nets, a temporary fund has been proposed, a Recovery Fund, to stimulate the economy for the recovery phase”.

The online stresses the Eurogroup’s decisions have added to what is already “an enormous amount of stimulus in place to fight the coronavirus and its economic consequences.

To give credit where credit is due the fiscal answers in the Eurozone have been much swifter and stronger than in the past” but the issue of ‘debt sustainability’ is by no means yet off the table.

With all the new stimuli ready to put into place the long-term debt position of countries will still be negatively affected by additional spending. And that is the Catch-22 of the next step dividing European politicians.

Already on Friday, António Costa was giving interviews in which he once again put Holland on the spot (click here).

He told Lusa, for instance, that if European leaders cannot come up with a common response (ie agreement on how money can be spent without leaving countries mired in further debt) it will be time to question whether “there is anyone who wants to be left out” of the EU or 19-member eurozone. Naturally, I am referring to the Netherlands”.

Backing Mr Costa came President Marcelo, who told journalists on Friday as he extended the State of Emergency by another two-week period to May 1, that in his opinion “it would be serious if after so many days Europe doesn’t unite to look at something which is absolutely urgent now”. By ‘something’ he too referred to a common response to reconstruct economies and countries affected by the pandemic.