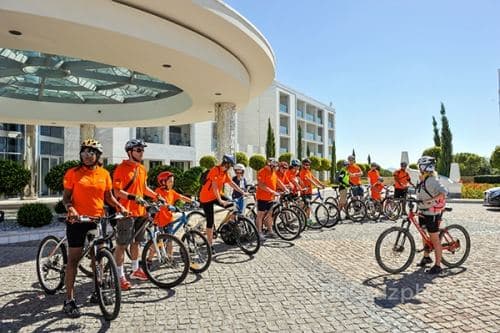 First to enter the club was Jim Ditheredge, a transfer from Rotary Club Sutton Coldfield Vesey in England. He has more than 30 years experience in Rotary and is a recent retiree to the Algarve, where he is already active in several organisations.

Last week, as part of a meeting to welcome a large group of Rotary dignitaries from the UK, Rotary Estoi Palace took the opportunity to officially invest another new member, Ian Lowe. Ian has resided in the Algarve for several years and many people will know him from his voluntary work with both the São Bras Museum and Bombeiros.

Chris Garner, from Rotary Club of Hebdon Bridge in Yorkshire, is currently serving as a co-ordinator for Zone 17 of Rotary International. As he has retired to Tavira this month and has frequently visited the club at Estoi, the club chose to honour Chris with an Honorary Membership.

Also at the meeting was Mike Webb, Past President of Rotary International of Britain and Ireland, and Director-Elect for Rotary International. As an Honorary member, Chris will be working with the club in several capacities and is keen to get acquainted with other Rotarians in the Algarve.